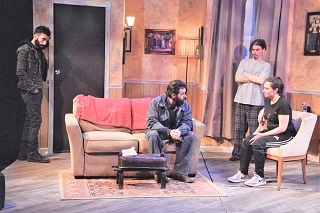 From November 16-18, Axial Theatre will launch its 20th anniversary season with the world premiere of Senescence, a new play by Axial’s founder, Howard Meyer, that takes an unflinching look at the devastating and deadly effects of chemical toxicity and the ire of Mother Nature when an alleged prophet comes to a blue-collar town. Award-winning filmmaker/director James Fauvell will direct.

Senescence tells its tale through the words and actions of three childhood friends who grew up and still live in the oil refinery town of Linden, NJ, and their encounter with an enigmatic stranger who, via a dangerous combination of wisdom and persuasion, upends each of their lives forever.

Meyer’s most recent original work, Paint Made Flesh, recently completed a run at The Cell in Manhattan; it was a semi-finalist at the 2015 O’Neill National Playwrights Conference and PlayPenn and selected by The Last Frontier Theatre Conference.