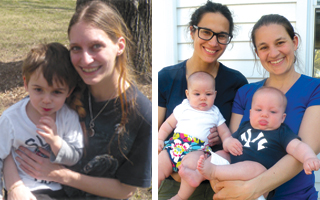 Everyone has been out and about in Briarcliff now that the weather is getting better, but especially Moms. Everywhere you look there are strollers, moms with their children at the playground, sitting in front of Twist with ice-cream cones, riding bikes together on the trail behind the library or with high chairs next to them, eating lunch at an outside table at the Patio Restaurant.

At right, Jesse Parker with her son Aiden and Stephaine Leveille with Teddylynn and Kelly Hill with Samuel.

There seems to be a collective sigh of relief, an unfettering of physical and emotional fatigue that comes from being cooped up together indoors during a seemingly endless winter.

I wandered around the Village looking for moms and children who wanted to share their Mother’s Day plans or thoughts about their own mothers.

More often than not people were very polite but declined to talk about their children or have their children’s photos taken. Sadly, modern mothers have become overly fearful of the outside world, even in a small town like Briarcliff.  What did become evident as I talked with people is that Briarcliff and surrounding communities are made up of all kinds of mothers. There are older mothers, mothers that work, mothers that don’t, mothers who grew up in the area and mothers who grew up in foreign countries.  There are grandmothers and great-grandmothers. There are mothers who love being a mother and others not-so-much.  There are mothers who have a lot of practice at the job and then there are the first-time Moms.

New mothers with small children often have no idea exactly what they signed up for. The sacrifices are staggering sometimes. “What do you mean I won’t get to go out to a movie for three years?” You just can’t prepare yourself for what you have to give up, especially what it does to your body and your time for yourself. Of course being a Mom can be profoundly rewarding but the reason the time with your children can seem to fly by is because you have lost all track of time, putting one foot in front of the other dealing with the chaos of the moment. It requires a warrior-like determination and stamina.  This can be doubly true when parenting is somewhat non-traditional.  This is true of Jesse who graciously agreed to tell her story and that of her son Aiden, a bright-eyed and energetic toddler.

Jesse Parker of Briarcliff was attending Westchester Community College when she became pregnant with her son Aiden who is now three years old. “Raising a child as a single parent can be very, very stressful,” she notes.
She has been fortunate to have the support of her family so that she can be a stay-at-home mom for the time being.  She plans on finishing school and getting a job when Aiden gets a little bit older. Jesse is very grateful this Mother’s Day for her own mom, Debbie Kittay-Parker (Grammy to Aiden) who is helping her daily with caring for Aiden. “I don’t think this is what my parents had in mind for me,” says Jesse as she runs down the hill after an enthusiastic Aiden, chasing after a small ball.  The love they have for each other is clear as she scoops him up and he buries his face into her neck. “My parents really love Aiden and I don’t know what I would do without them.”   She plans to move out one day as soon as it is possible as she doesn’t want to burden her family, but for now she is in a good place for both of them. As for celebrating Mother’s day for her mom, “We’ll probably take my mom for brunch on Mother’s Day,” says Jesse.  As for what Aiden wants to do for his mom, he plans on sharing his dinosaur oatmeal with her and if possible ice-cream cones as well.

Kelly Hill and Stephanie Leveille live in a charming cottage on the border of Briarcliff and Ossining.  Kelly gave birth to their twins, Teddylynn and Samuel Leveille four months ago. It took awhile to get pregnant using a sperm bank, but the couple couldn’t be happier with the outcome. Kelly, who previously ran and taught at a local yoga studio, is planning to stay at home with the babies and Stephanie, who is a special ed teacher for 1st and 2nd graders in Ossining and a well- known soccer and basketball coach at Ossining High School, will continue to work.  Even though  Kelly was the one who gave birth, Stephanie felt a deep connection to the babies from the moment she heard their heartbeats.

Despite their nonconventional relationship, “We have felt nothing but an accepting and loving reception from the community,” states Kelly, “What you exude is what you get back,” she adds.   We aren’t trying to make a statement with our relationship. “I don’t even like to put the gay/lesbian label on it.   We are just two women who love each other,” says Stephanie.  There is no end of support and help from both of their families who live throughout Westchester County.  “The twins have become sort of mascots in Ossining,” says Stephanie. There are high school students lining up to babysit.

This is their first Mother’s Day (both consider themselves “Mom”) and they are planning to create their own Mother’s Day traditions in addition to honoring their own mothers, Lynn Hill, and Teddy Leveille. “When I
was young, says Kelly, I used to always go to something called “The Big, Little Show” which was a fundraiser for the Westchester Country Club, held each year on Mother’s Day.  Stephanie says that her family really didn’t do much to celebrate the event.

Anyone who has ever been a mother or had a mother knows that one day of recognition for what a mother does is, well, rather pathetic.  We all know that mothers deserve something along the order of at least a week-long
holiday with massive parades, extensive pampering and not being allowed to pick up a single shoe that someone else has left in the middle of the hall.  After Mom has been given the perfunctory bouquet of flowers, she usually has to find the vase, cut the flowers, add the water, arrange the flowers and wipe the counter.  After being served breakfast in bed by her children, she will make the bed, take the tray to the kitchen, clean off the tray, clean the pots, pans and dishes left in the sink, or put the breakfast ingredients back into the refrigerator and pantry, wipe down the counter and the  sink,  and then figure out what she is going to do for her mother.
Regardless of the circumstances, Mother’s Day is about honoring and love and deeply respecting what it takes to be a mother for life. Every mother, above all else, deserves acknowledgment for this incredibly hard job… a trip to Fiji and a lot of jewelry wouldn’t hurt either!