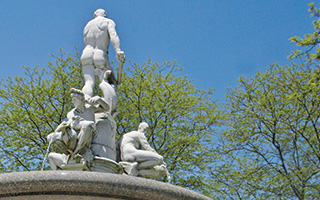 While the Kykuit estate is perhaps best known for its grand architecture and its history as the home of four generations of Rockefellers, memories of the estate’s outdoor areas — elaborate gardens, unparalleled views — tend to linger in one’s mind after a visit.

At right, Image of Oceanus by Bryan Haeffele.

‘The estate’s commanding natural vistas and collection of outdoor sculpture includes the nearly 30-foot Oceanus fountain at the end of the estate’s entrance forecourt. It’s nearly as iconic as Kykuit’s six-story stone mansion, which faces it.

One of twenty fountains found on the property, the Oceanus fountain is an exact replica of the Renaissance fountain designed by Giovanni Bologna for the Pitti Palace at the Boboli Gardens in Florence. The Kykuit version, like the original, shows the figure of Oceanus, father of the river gods in classical mythology, holding a baton with which he commands the three seated figures, lesser gods representing the Nile, the Euphrates, and the Ganges rivers. Oceanus, the estate’s largest fountain, is in a prime location, looking west toward the Hudson River, symbolically linking the Hudson with the great rivers of the Old World.

Like many large estates created between the 1880s and the 1930s, Kykuit features a Rose Garden. Bosworth designed Kykuit’s Rose Garden as the principal feature of the north terraces; in its semi-circular form, with its colonnade arbors and Renaissance revival fountain, the garden is distinctive of Beaux-Arts planning. Within the overall design, the Rose Garden balances the linden allée  and Inner Garden on the south side of the house. Just as the Oceanus fountain is a replica of the Boboli Gardens original, so is the Rose Garden fountain a replica of another Boboli Gardens Renaissance sculpture. It is topped by a carved stone putti based on a Donatello sculpture.

In the Morning Garden, there is a gilded bronze fountainhead in its central pool that was designed and modeled by Francois Tonetti. Framing the western end of the Inner Garden is an allée of linden trees, and in the middle of it is the Moorish Fountain, made by the Gorham Company of Providence, Rhode Island, a company perhaps better known for its silver tableware. The basin’s faceted shape is distinctive of Moorish decoration in Spain during the 14th and 15th centuries. The gilded bronze fountainhead, designed by sculptor Francois Tonetti, shows Orpheus playing a musical instrument amid the passion flowers.

Bisecting the Inner Garden and running perpendicular to the allée and the Tea House on the opposite end, is a canal with jets. It’s a forceful garden design element, where water, one of the garden’s main themes, is given architectural form and connects the northern and southern portions of the Inner Garden.

The form is inspired by canals used in the great Islamic gardens of the Alhambra in Granada, Spain. Bosworth describes the canal as “lit from beneath.” He went on to say that at night, when seen from the house terrace, the canals produce an effect resembling that of a jeweled necklace. Practically all of the fountains and grottos on the grounds of Kykuit can be illuminated at night by concealed lights within them.

Kykuit, a National Trust historic site maintained by the Rockefeller Brothers Fund, is now open for public visitation via tours offered by Historic Hudson Valley. Go to hudsonvalley.org or call 914-366-6900 for information.