Glorious parkland or progressive farmstead? If you were a well-funded philanthropist, which would you donate to your local community? For the Rockefeller family, the answer was both. And for us fortunate residents of this corner of Westchester, both the Rockefeller State Park Preserve and Stone Barns Center for Food and Agriculture are ours to appreciate.

Separate but adjacent on a large acreage recently augmented thanks to a bequest from David Rockefeller’s estate, these two expressions of Rockefeller generosity offer complimentary (at times overlapping) aspects of the family’s wish to give back, conserve and educate. Philanthropy is a family trait that has descended the Rockefeller generations, hand-in-hand with their business and political interests. John D. Rockefeller Junior was the driving force behind the Preserve, while his son David was responsible for setting up Stone Barns with his daughter Peggy Dulany. Previously a farmstead and dairy where David’s wife Peggy Rockefeller – herself an active figure in land conservation – later raised cattle, Stone Barns was founded after Peggy’s death in her memory.

Nowadays the farm and education center, which operates on more than 350 acres between its own property and the Preserve, is on a mission to teach progressive, regenerative farming and sustainability, and help reconnect the public with the sources of our food. It’s an inspirational institution in an idyllic location, surrounded by gardens, orchards and spreading fields. (The world-famous restaurant Blue Hill at Stone Barns shares the location but is a separate business.)

“Eight livestock and crops apprentices join our team for the season each year, and their hands-on training is enriched with an academic curriculum that includes business, pollination, water and soil workshops,” explains Senior Communications Manager Jessica Galen. There’s an annual young farmers’ conference too, and a training program for high school teachers who will implement food and sustainability lessons in their schoolrooms. 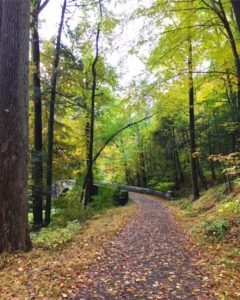 The public can attend the open workshops, or go on tours or evening walks around the farm, its greenhouses, fields of pigs, cattle and sheep, its bee hives and mobile henhouses. “The pigs live entirely on food waste,” Jessica points out. Stone Barns uses spent grain from Captain Lawrence’s craft brewery in Elmsford as part of the pigs’ diet, along with field scraps from their own and other farms, and whatever the animals can forage in the local woods. “You’d think the pigs would ruin the woodland, but they clean it up and leave it better than they found it,” says Peter Iskenderian, Manager of the Rockefeller State Park Preserve.

The Preserve’s commitment to education and the environment is one of the areas where it overlaps with Stone Barns. “Grazing plans for the farm’s cattle mean they use our fields to eat the invasive species like poison ivy and Japanese angelica,” Iskenderian explains. “And their manure also fertilizes the land.” Another area of co-operation is creating favorable conditions for bird species like the bobolink. The Preserve halts its mowing of certain areas during the breeding season, turning them back into grasslands. As a result, the bobolink, in decline through loss of nesting habitat, has returned.

It’s one more success for the Preserve, an 1800-acre oasis of bio-diversity committed to ecological stewardship. Its woodlands, streams, fields and wetlands are home to a host of native birds, amphibians, reptiles, mammals, fish, native pollinators, and insects. The National Audubon Society has named it an Important Bird Area.

Was this what John D. Rockefeller Junior had in mind, when, following Frederick Law Olmsted’s precepts, he carved the Preserve out of farmland, created the lake and laid down the carriage trails? Because – authentic though it appears, with its vista of rolling landscape, rivers and woods – the place is an artificial, man-made environment; the result of one person’s dream. 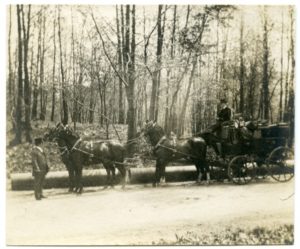 “The Preserve was open to the public from day one,” says George Gumina, Founder and President of The Friends of the Rockefeller State Park Preserve, “and now some 400,000 visitors enjoy it each year.” Gumina, a Rockefeller family member who set up the Friends some 20 years ago to help the New York State maintain the Preserve, has spent his working life in philanthropy and values the need to give back. “I love this place,” he confesses, “and that’s why I continue to fund-raise and help with projects.”

The Preserve is managed by the state and maintained by funds drawn from a Rockefeller endowment. But that maintenance is costly. Its 60 miles of broken stone roads that characterize the place, and make it so attractive to walkers, joggers and horseback riders, cost approximately $4,000 a year per mile. Gumina’s current project is the restoration of the Brothers Path which runs around Swan Lake and will need half a million dollars. He’s hard at work on the fund-raising. Even the most generous gifts sometimes need a helping hand.