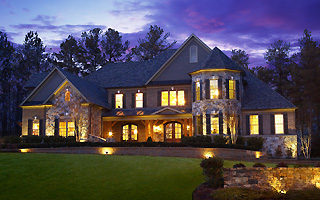 In December of last year, Toll Brothers, a large well-known developer located in Horsham (outside Philadelphia), Pennsylvania, took over the ownership of the Wilson Park property from WCI, the company that had originally planned to develop the nearly 50-acre site into parkland and upscale homes. The property sits between the Tarrytown Lakes and County House Road (leading out to Route 448 in Sleepy Hollow).

Toll Brothers plans to begin building 14 new homes this June and will start with a demonstration model which will furnish the public with a sample of what each of the finished homes will look like, inside and outside. The acreage involved will be known as Parcel 3 and Parcel 4, separated by existing homes and roads.  Parcel 3 will ultimately hold four new homes and Parcel 4, abutting County House Road, will hold ten new homes of various  sizes depending on what each owner finally selects for their individual needs and tastes.   Approximately 20 acres, in agreement with the Village, have been set aside for open space or parkland.  The original plan called for 11-plus acres to be purchased by the village at $1 million, but with the downturn in the economy, the Village was able to make the purchase for $800,000 instead.  Parcel 2 will remain wetlands and Parcel 3 will be a soccer field.

Each home, according to Toll Brothers personnel, will only be built when the intended owner signs the purchase agreement. Village Building Superintendent Mike McGarvey said in an interview that given current market conditions, it would be difficult to estimate when all the units would be sold.  Also, McGarvey observed, there seems to be somewhat of a move by younger people to get away from the large scale properties that were so popular over the last 20 years.   To that point, Toll would not put an estimate on the ultimate prices of the newly built homes except to indicate that “they would be in the vicinity of at least $1 million or more” and would range from 3500 sq. feet to 6000 sq. feet in overall size.

McGarvey said that the Village will put in place a 12” pipe extending l550 ft. to an existing system of 12” pipe to supply water to the homes as they are built.  Amenities such as swimming pools will be available to home buyers who must go through the normal approval process at Village Hall.

For those interested in learning about the Toll Brother’s new project, contact their sales office at (914) 631- 4500 or visit them online at www. tollbrothers.com/newyork.