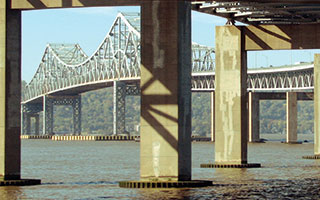 Rich in history and character, Tarrytown is located on the eastern bank of the Lower Hudson River. It is the well-known home of the Tarrytown Music Hall, Washington Irving’s Sunnyside and Lyndhurst, a gothic revival mansion overlooking the Hudson River. It is also the gateway to The Governor Malcolm Wilson Tappan Zee Bridge, which carries the New York State Thruway across I-287 to South Nyack, Rockland County and beyond.

The residential population of Tarrytown is slightly over 11,000 people, however as many as 140,000 – 170,000 vehicles pass through daily to cross the Tappan Zee Bridge, which spans the second widest point of the Hudson River. An Act approved by the Legislature and signed by then Governor W. Averell Harriman on February 28, 1956, officially named the structure the “Tappan Zee Bridge.” This named is derived from the Tappan Native American sub-tribe of the Delaware/Lenni Lenape, and the Dutch word zee, meaning a sea or a wide expanse of water. In 1994, the Bridge was rededicated as the Governor Malcolm Wilson Tappan Zee Bridge in honor of the former New York Governor.

Prior to the bridge construction, The Nyack-Tarrytown Ferry transported passengers across the River beginning in 1834. The ferry remained in service until the Bridge opened. Construction began for this primary crossing in March 1952, which officially opened in December 1955 to 18,000 vehicles per day. Designed to accommodate about 100,000 vehicles per day at most, current usage makes the Bridge obsolete and it is in fact seven years past its intended lifecycle. The total length of the Bridge and its approaches is 16,014 feet. At 1,212 feet, the cantilever span remains the ninth longest in the world. The Bridge spans 139 feet above the river. Governor Thomas E. Dewey, needing the tolls from the Bridge to help finance the New York State Thruway System, determined that the Bridge’s location was to be outside the 25-mile radius from the Statue of Liberty, where it was out of the domain of the Port Authority and New Jersey. Construction did not begin until 1952, due to a shortage of steel created as a result of the Korean War.

The Bridge was designed using state-of-the-art World War II technology at a cost of 80.8 million dollars. The engineering firm Madigan-Hyland oversaw construction for the Bridge, designed with the main span supported by piers composed of steel truss towers set on eight buoyant concrete caissons. Pumps are used to maintain and adjust the buoyancy of the caissons.

Some of my earliest childhood memories include family trips across the Bridge to visit maternal grandparents residing with my Aunt and Uncle on the other side of the majestic and scenic Hudson River. My memories pale in comparison to the current experiences travelers have to deal with crossing the Tappan Zee Bridge on a daily basis.

The Tappan Zee Bridge of my youth is no longer a joy to cross. Originally six lanes, there is now a seventh lane which is reversed twice a day with a moveable barrier to accommodate the high volume of traffic. There are no emergency breakdown lanes and commuting can be a slow-moving nightmare at times. The Tappan Zee-I287 environmental review reports an average of three accidents per day resulting in severe backups in both directions. More frequent unscheduled lane closures due to increases in required maintenance, has also caused additional traffic delays for travelers over this Bridge.

Two falcon nest boxes were installed high up on the main truss of the Bridge in the late 1980s. In exchange for the commanding views of the Hudson River, falcons keep the pigeon population at bay. Pigeon droppings deteriorate the paint and increase rusting of the steel.

According to the New York State Thruway Authority, more than 25 people committed suicide on the Tappan Zee Bridge from 1998 to 2008 – an unfortunate distinction that in 2007 prompted the installation of four phones
connecting callers via the National Suicide Prevention Lifeline suicide prevention hotline to area counselors.

Tolls on the Bridge are $5.00 heading eastbound, $4.75 with an EZPass and $3.00 with a commuter pass. Actual revenues posted by the Thruway Authority were $121,000,000 in 2011. Bridge tolls rather than tax dollars cover all maintenance and repairs. When first built, the Bridge and its approaches originally cost $80.8 million. Maintenance costs run very high for the Bridge, which is thoroughly inspected every two years as mandated by current Federal and State guidelines.

Additionally, there is an 80-member crew that performs inspections and preventative maintenance on a daily basis, such as painting, deck, concrete and steel repairs. Sensors have been installed that monitor stresses in wind bracings as related to wind speed and temperature. The Thruway Authority manages the maintenance of the Bridge with a large inventory of equipment ranging from tugboats to tow trucks.

As with any older structure, deterioration of the Bridge is an ongoing maintenance problem. Since September 2007, large portions of the deck were cut and removed at night. California-based Tutor-Perini Corporation was awarded the contracts to carry out the deck replacement. The concluded first phase of the work replaced the outer four lanes with a price tag of $176 million — $29 million over budget. The second phase, awarded to the company for nearly $149 million, replaced the deck on the interior three lanes.

There can be no doubt that this river town fixture was a massive undertaking to build and now to maintain. The New New York Bridge will replace the Bridge sometime after 2018. Until then, travelers crossing the span will need to deal with the problems that have evolved over time until the Tappan Zee Bridge is no more than just a memory, much like the Nyack-Tarrytown Ferry or childhood visits to ‘Aunt Dot’s’ house.