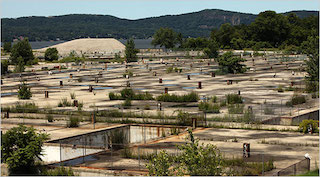 Sleepy Hollow’s Local Development Corporation (LDC) is the owner of 27 acres of land referred to as the East Parcel of the former General Motors site. The lion’s share of the site is rigorously being developed by Edge-on-Hudson, with fill being delivered from barges and trucks along with the demolition of the entire existing concrete base.

By comparison, the Chairman of the LDC, David Schroedel, has requested an extension from the Sleepy Hollow Planning Board for beginning to bring in fill.  On January 19, the Board granted a one-year extension to Mr. Schroedel, who was initially granted approval for fill in January of 2016.

That permit had been expedited to accommodate fill being brought to the LDC site by a contractor in the City of Yonkers. That deal never materialized and the year-long permit expired. The LDC site will need between 100-200,000 cubic yards of fill material.

With regards to the required Draft Environmental Impact Statement (DEIS) the LDC is addressing a larger buffer area to the north along the Pocantico River, a larger footprint for the Community Center, more parking spaces for events at Historic Hudson Valley’s Philipsburg Manor, a Skateboard park and a “Great Lawn.” A Final Environmental Impact Statement (FEIS) is slated for submission to the Village in mid-March. Of note regarding the LDC is that they have declared themselves the Lead Agency in the Environmental Statements, and that begs a singular and unmentioned question. If the LDC is the developer of the land how can they also be the determiner of environmental protection? Maybe the answer can be gleaned from the Mel Brooks movie, “History of the World Part 1” where, after several outrageous acts, he looks into the camera and says, “It’s good to be the king.”

Suprisingly the LDC had reportedly rented a portion of the East Parcel to a contractor doing work for the MTA. The LDC had done so starting last July for a 6-month period and without approval from the Planning Board. No permit to allow that land use had been issued, yet construction material, office trailers and equipment were set up in a fenced-off area on the northwest corner of the LDC. This issue was kept secret by the Village, which reportedly collected $8,000 a month rent. It was only after repeated questioning from the Planning Board that the Village acted to terminate the non-permitted use.

With regard to other monies, $1.9M has been paid by the MTA for its purchase of the railroad siding that is within the LDC parcel. A fair amount of criticism did little to persuade the LDC and the Village, which are intertwined with personnel, to rethink a railroad construction site in a mixed-use waterfront redevelopment area. Again the adage goes, “Good planning is good, bad planning is forever.”

If Mr. Schroedel had intended to break ground this spring, that intention seems to be upon us, and with March 21st officially kicking off the season, the LDC will not have shovels in the ground. In fact, at a February 16th Planning Board meeting, he revised the ground-breaking date. Everyone will be 1½ years older with the new shovel-in-the-ground projection.

When and if the LDC site does become active, the Special Permit plan that was created with the Lighthouse Landing project will have been revised to include a bridge connecting Continental Street to the West Parcel, a community center, the removal of 18 acres of land to be dedicated to Historic Hudson Valley uses, a soccer field, and an outdoor amphitheater. All in all, it appears that the planning and design have been molded by public comments more than by professionals. In trying to satisfy so many varied requests, the exacting and precise planning work done over a long period of time in the original Special Permit Plan, appears to be part of an outgoing tide. What has not been specifically addressed by Chairman Schroedel is where the money for these projects will come from. Maybe, on an incoming tide.