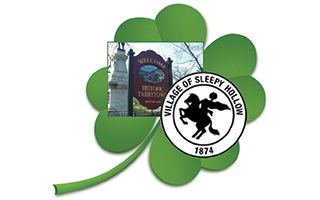 According to Irish Echo’s online edition, www.irishecho.com, long-time coordinator of the Parade, Paul Clarke of Sleepy Hollow, will lead the event as this year’s Grand Marshal. The parade will be dedicated to the United Irish Counties. Prior to the Parade, a Mass will be celebrated at The Church of the Transfiguration on South Broadway in Tarrytown at 10 am.

On the day of the parade, look for available parking spaces on Central Avenue, or North/South Washington Street. There are also several public parking lots nearby. There is also parking at the Tarrytown Train Station, and a metered municipal lot is located off of South Washington (right behind Main Street) for those that wish to view the parade starting in Tarrytown. Use the Philipsburg Manor parking lot if you plan to attend the parade near where it ends on Beekman Avenue in Sleepy Hollow.

A grant application with the National Endowment for the Arts (NEA) was detailed at the December 17th Village Trustee workshop by the Village’s grant writer. This federal grant funding is designed to contribute to the livability of communities and place the arts at their core. The Board of Trustees authorized this application at its January meeting.

The Board was informed that the application for new project funding for 2014/2015 needed to be submitted. Goals for the funding of the grant were detailed to show how the funding would benefit the Village residents both socially and economically. The intention of the grant funding is to bring arts into the community and as a result, bring the community together.

Concepts introduced entailed presenting multiple art forms to residents. These art forms included circus performers, film, fine art, dance, music and a possible mural. The timeline would be for the arts project to begin this summer and culminate in 2015 with a documentary. Outside of the grant project, the long-term goal for the Village is to develop an arts center in Sleepy Hollow.

With NEA goals in mind, a circus tent is proposed as an effective tool to draw residents.  A circus midway may also be created featuring the works of visual artists. Positive economic impacts of this project include job creation, increased business and drawing a large audience which will create opportunities and help Sleepy Hollow become a destination for local arts. Details include commissioned artists making use of vacant storefronts by offering classes and small performances. The grant request is $130,000-150,000, with a 50% match in-kind.