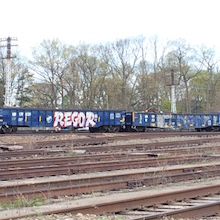 This publication has followed the redevelopment process and hiccups of the former General Motors site now known as Edge-on-Hudson.  Twenty-nine acres of the entire parcel, referred to as the east parcel, was deeded to the Village of Sleepy Hollow, and specifically, the non-profit Local Development Corporation or SHLDC. This entity has as its Chairman, David Schroedel, a former Village Trustee and campaign manager for Mayor Ken Wray’s re-election.

The LDC parcel is east of the railroad tracks and known to house brownfields in need of environmental remediation.  Early in 2016 the LDC sent out a press release announcing a licensing agreement with Metro-North Railroad on its east parcel. The first paragraph began with, “The Sleepy Hollow Local Development Corporation (SHLDC) announced that it has licensed approximately 2 acres of track siding to Metro-North Railroad, effective immediately. The agreement, with a potential value of more than $1.8 million, was approved at a separate meeting of the MTA Metro-North Railroad Board and the SHLDC Board in recent weeks.”

In what appears to be a festive announcement, questions arise as to how the SHLDC is operating within the Village of Sleepy Hollow guidelines, laws and protocols. For clarity purposes, the approximate 2 acres of railroad siding that Metro North originally used was for shipping and receiving when General Motors was in operation. That use terminated with the closing of the General Motors Plant, even though Metro North continued moving railroad cars in and out of the location.

Question number one for the SHLDC is: Did they go through the Village approval process for granting such a lease?  Question number two is: Was this lease agreement allowed under the original “Special Use Permit” of Lighthouse Landing? The questions mount, with number three being: Did the SHLDC go through the Planning Board or the Board of Trustees for hearings and approval before granting this lease?

Of note regarding the SHLDC and Metro-North Railroad agreement is that there is an option for the railroad to purchase the siding tracks before the end of 2016 for $1,573,155. If so, they would “continue its current use of sidings to stage equipment clear of the Hudson Line Tracks for construction and maintenance work in the Mid-Hudson region, including the ongoing Sandy Remediation Project,” according the press release.

With Edge-on-Hudson placing a ceremonial shovel in the ground on May 18 for the start of Phase 1, which will include a combination of 306 apartments, condominiums and townhouses, west of the SHLDC parcel, another question arises. Do potential owners want an active railroad yard next to them? Certainly residents have grown accustomed to the sounds of trains passing by over many, many years. However will new residents want to live next to and look out at an active train yard?

Other questions arise concerning Village of Sleepy Hollow employees actively working with the  separate entity called the SHLDC and whether there are conflicts of interest with that scenario.

Lastly, the question regarding landfill needed at the SHLDC site – where it’s coming from and how it will arrive.  Well… that’s another story.