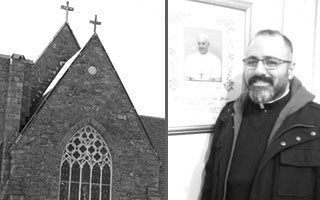 The familiar English Gothic Church on Broadway in Sleepy Hollow just north of Patriots Park may look the same as always, but exciting things are happening there and it is in no way the same. On August 29 of this year the title to the entire property, including the church, parish hall and rectory, was transferred from the Archdiocese of New York to the Maronite Eparchy under the jurisdiction of Bishop Mansour. The church is now officially designated “The Saint Paul II Maronite Catholic Community at Immaculate Conception.”

Most American Catholics celebrate their liturgy in the Roman rite using English. However, in the universal church in communion with Rome there are many other rites, liturgies and liturgical languages used such as the Byzantine, Syro-Malabar  and Greek Catholic rites. They are all of historical importance.

The Maronite rite has a membership 3.29 million people. It is one of the Eastern Catholic churches in full communion with  Rome.  It traces its heritage back to Maron,  a 4th-century Syriac-Aramean monk venerated as a saint. The first Maronite Patriarch, Saint John Maron, was elected in the late 7th century. Maronites are a major religious group in Lebanon.  Most members of the Maronite community in America  are of Lebanese and Syrian heritage.

The new pastor of the Immaculate Conception community, Father Dany Abi Akar, will be celebrating masses in English for the Italian-American community and other English-speaking congregants, as well as in Latin for others. The Maronite liturgy at 11:30 each  Sunday is celebrated in Arabic, English and Aramaic (the ancient language of Christ himself.)

Eparchy,  a Latinized Greek word,  means a territorial jurisdiction, somewhat like a diocese. The Sleepy Hollow parish belongs to the Eparchy of Saint Maron in Brookyn, where the Maronite cathedral is located.  Its leader is the impressive and gracious bishop Gregory John Mansour who has visited the new local parish of John Paul often and mixes freely with his congregation in a warm and gentle manner.

It should be noted that a number of Latin rite Catholics also enjoy participating in the Maronite liturgy and befriending members of the local Maronite community.

Cardinal Dolan has stated about this new parish:

“There are four marks that distinguish our faith community: One, Holy, Catholic, and Apostolic. The Saint John Paul II Maronite Catholic Community at Immaculate Conception in Sleepy Hollow is a living embodiment of these four identifying characteristics.  Alleluia.”

“I was raised as a Roman Catholic and knew of other rites, but never had a chance to explore them in detail. Having the Maronite church down the road makes it very accessible and easy for me to go to. So I registered as a parishioner at the Maronite Catholic church.

“They have been very welcoming and  the music is beautifully done. Father Dany is a very low key, down-to-earth pastor and the other parishioners have been very friendly. There are minor differences as to how the Maronite Mass is said, compared to the Roman Catholic Mass, most notably the fact that it is said in Arabic, Aramaic and English languages.”

“My husband’s family has always maintained a very strong faith commitment to their Maronite identity. Their late brother, Antoine-Hameed Mourani, (after whom my oldest son is named) was a retired bishop and the former Maronite Archbishop in Damascus, Syria.

“As a Roman Catholic, I have never felt like a stranger at all in the Maronite church because the liturgies essentially follow the same outline, and the key prayers in the Mass  are all there.  What I love about the Maronite liturgy is its spirituality and the beautiful music, which is sung in Arabic. The chants and the hymns just lift you to a different place, a beautiful, peaceful place. I don’t have to know exactly what the words mean, although they do have a bilingual prayer book and the Liturgy pretty much alternates between Arabic and English.

“The Maronite priests are wonderful. They get really involved and care about their parishioners.  In Arabic, the priest is called “Abouna” which means “Father” and  Abouna Dany, our parish priest, is so young and energetic.  He’s perfect for Saint John Paul II because it is such a diverse parish to take care of.

“Our Maronite community is very warm and sociable. They love getting together after Liturgy for the coffee hour. I never have a problem getting my boys to go to church because they love to see their friends in the hall afterwards. Having all that delicious food helps too!”

“Back home, I have been exposed all my life to the Universal Church represented by the Latin Church, called Roman Catholic in the U.S. and to the Eastern churches, Maronite, Byzantine, Armenian, Syriac and Chaldean. Having established a Maronite church for the first time in Westchester is an expression of what the Universal Church is all about.”

“The church has become our home, filled with friends who have become our family.  A very large, extended and loud family.”

Fadia Nassar summed up the new experience by saying:

“Being Maronite we are Catholic as well, and I have always enjoyed attending a Roman Catholic Service and appreciated the beauty of these celebrations. But having our own Maronite Church fulfills a long time dream of being able to raise our children and eventual grandchildren in our rich Maronite heritage and traditions. To me in many ways we are getting the best of both worlds with Saint John Paul II at the Immaculate Conception.”