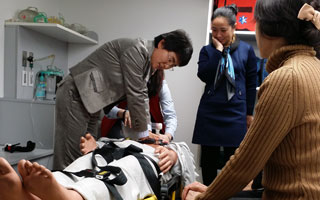 A delegation of Chinese emergency medical physicians recently visited and toured the Hoch Center for Emergency Education at Phelps Memorial Hospital Center.  The team is touring the U.S. as part of their research to restructure Beijing’s EMS system.

A delegation of ten Chinese emergency medical service physicians from Beijing’s “120” EMS system (the equivalent of the U.S. 911 system) recently visited the Hoch Center for Emergency Education at Phelps Memorial Hospital Center.  The group was touring various EMS centers of excellence across the U.S. as part of their research for a restructuring of the EMS system in Beijing, China’s capital city.

While at the Hoch Center, Anne Castioni, Coordinator of Emergency Medical Education, presented a lecture on the American EMS system and education. She demonstrated some of the center’s unique educational tools, including high-tech mannequins, which students use to practice administering medical treatment in a mock ambulance or hospital room.

For more information on programs available at the Hoch Center for Emergency Education, call 914-366-3577, or go to www.phelpshospital.org/clinical-services/emergency-training-services.