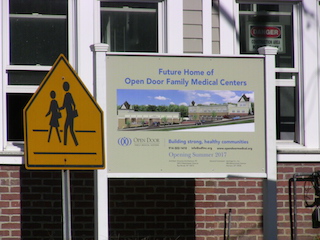 River Journal has covered the Open Door Family Medical Center in Sleepy Hollow for many years, as it sought to move from its 80 Beekman Avenue address to 300 North Broadway. That move initially met with resistance from the Village Board of Trustees and the Planning Board, who recognized that zoning laws and a paucity of parking could not accommodate the increased size of the new building’s footprint nor the medical uses Open Door had requested.

In the latter part of 2014 Sleepy Hollow’s Zoning Board of appeals granted a variance to the Open Door which permitted off-site parking for the 300 North Broadway building. That off-site parking turned out to be 310 North Broadway, the former Dominick’s Limousine site, along with a vacant lot at 316 North Broadway. In December of 2014 the Planning Board gave site plan approval and in early 2015 Sleepy Hollow’s Architectural Review Board approved Open Door’s exterior design and signage.

The projected new home for Open Door at 300 North Broadway is a total of 12,100 square feet with a lower level that is 5,300 square feet. This lower level will house a reception area and waiting room along with a conference room, offices, restrooms and four dental examination rooms. The second floor which is basically at street level on New Broadway is 6,800 square feet, and it, too, will have another reception area and waiting room. Three medical residents’ work rooms, sixteen exam rooms, one procedure room, along with restrooms and offices are also part of the plan.

Parking at the building will include 2 handicapped-accessible parking spaces and a loading dock. The former Dominick’s Limousine Service building is being converted to a parking garage consisting of 21 parking spaces. The vacant lot at 316 North Broadway will accommodate 19 parking spaces.

The anticipated completion date is summer of 2017, barring any unforeseen construction delays. At this time all Village permits and approvals have been granted.

River Journal asked Senior Marketing Coordinator at Phelps Memorial Hospital, Mary Sernatinger, about the medical services Phelps provides to the Open Door. She and her colleagues contributed the following:

“All 20 of NYMC-Phelps Family Medicine Residency Program’s residents serve as physicians at the Open Door Family Medical Center in Sleepy Hollow while receiving training under experienced family physicians who also provide care there. Family Medicine residency is a three-year program designed to train medical school graduates to become well-rounded family physicians who care for individuals across their lifespan within the context of their family and community. Sleepy Hollow Open Door and Phelps have maintained a strong relationship since 2011 when the residency program was founded. Since then, 12 physicians have graduated from the residency, five of whom now work as physicians for various Open Door Medical Centers throughout the greater Westchester community. The program is currently reviewing applications for the eight doctors who will begin next year, and they have already received 1,720 applications.”

The Open Door, which declares, “Your medical home offering primary care for everyone,” on their website, receives approximately 1,000 patients daily at their combined Sleepy Hollow, Ossining and Mount Kisco offices.