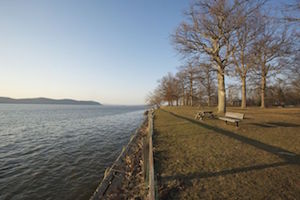 In the summer of 1930 the film “All Quiet on the Western Front” was released. It depicted a group of young German men who joined the German Army during WWI.  These idealistic men had their patriotism destroyed by the realities of combat.

For the sake of this article no comparison is made to the film. River Journal simply chose the title because in Sleepy Hollow there is a great deal happening “on the western front” — namely, the Edge-on-Hudson site.

Reportedly an email was sent to the Village of Sleepy Hollow from the Tappan Zee Constructors (TZC), withdrawing their request to park up to 375 cars for their workers on the Edge-on-Hudson site. As for TZC, their initial request to crush concrete from the dismantling of the Tappan Zee Bridge has not been withdrawn, and they will re-apply for that permit at a later date.

Regarding the above “west parcel” the Planning Board has a decision to make about whether it will reinforce the approved concept plan and not allow the developer to make changes without revising the “Special Use Permit.” Rather than circumventing years of careful planning, the current Planning Board is faced with incorporating strict time frames for approvals, incentives to the developer for compliance and penalties for failure to do so.

The Village Board should also be concerned that the completion of the project will take longer than planned or possibly never come to fruition.

The Planning Board is still hearing Sleepy Hollow’s Local Development Corporation (LDC) request for a permit to allow roughly 100,000 cubic yards of concrete slabs and roadway material to be trucked into Sleepy Hollow and through Continental Street from a stockpile in Yonkers. The concrete would then be crushed and potential environmental impacts loom. Traffic, noise, dust, damage to roads and buried infrastructure within the concrete are all significant issues. In addition, the possibility of taking property, including houses on Continental Street, is an outcome that the Village has not addressed, although concerned residents have.

The site referred to as the “east parcel” that the LDC wants to use for the concrete fill has a major contaminant of methane gas according to Village officials. The approximately 28 acres is scheduled to be used for a new Department of Public Works facility which will include a bus repair garage for the School District. It will also include two soccer fields, tennis courts and a baseball field. Additionally 8 acres are slated for donation to Historic Hudson Valley.

Additional news on Edge- on-Hudson was presented at an Industrial Development Agency (IDA) meeting at Mount Pleasant’s Town Hall. While many people were enjoying their holidays and others were preparing for Christmas, the IDA Board met at 4:45 pm on Wednesday, December 21. After a brief public hearing the IDA Board reconvened and voted to acknowledge acceptance of an Application of Lighthouse Landing Communities, LLC for Financial Assistance for the Construction and Equipping of the Mixed-Use Project in Sleepy Hollow Known as “Edge on Hudson.”

Fortunately one of Sleepy Hollow’s elected officials was told of this meeting at the 11th hour so to speak, and the Mayor and most of the Board of Trustees were in attendance. Mayor Wray repeatedly used the word “shocked” to address the IDA Board as he looked across the aisle at developer Peter Johnson and his attorney Mark Weingarten. Wray’s “shock” was reinforced by Village Trustee John Leavy and School Board President, Mimi Godwin both of whom addressed the Board.

In essence, the Village of Sleepy Hollow claimed knowing nothing about developer Johnson’s request for a PILOT (payment in lieu of taxes) program. The long and short of it is an exemption from sales and use tax, and mortgage recording tax which would amount to reduction of $23,654,875 in taxes for Edge-on-Hudson. In addition the application before the IDA Board also states that the developer may request “real property abatement” relief at a later date.

To property owners in Sleepy Hollow and all tax payers in the School District, a PILOT program has the capacity to lessen tax revenue to the Village and School District significantly. School Board President Godwin used the word “beg” in addressing the IDA Board and pleaded that they do nothing to reduce tax revenues to help the District. Trustee Leavy let the Board know that the last PILOT program with GM that the IDA approved was detrimental to the Village in every way. He was emphatic that they could not make the same mistake again.

Two years ago, on December 22, 2014, the Mount Pleasant Assessor’s Office revealed that Lighthouse Landing Communities purchased the property now known as Edge-on-Hudson for $39,500,000. To many in real estate that dollar amount for 66 acres of waterfront property was a good deal. To others it was an extremely good deal.

River Journal has requested from Sleepy Hollow attorney Clinton Smith and Mount Pleasant attorney Darius Chafizadeh information regarding the next IDA meeting date and what amendments Sleepy Hollow wants included with regard to the developer’s request for tax relief.