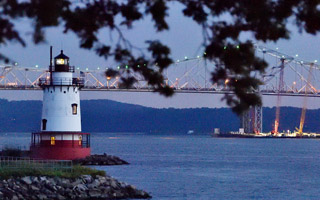 Out with the old and in with the new – as the saying goes. On Wednesday, June 10th the “new” gathered at the former General Motors site in Sleepy Hollow and dedicated the “new light” at the 1883 Lighthouse at Sleepy Hollow. Longtime residents will re-member that structure as the Tarrytown Lighthouse, but “in with the new” is here to stay.

Lighthouse Landing was officially swept away by the tides as well, and Edge-on-Hudson will inhabit the waterfront site. Billed as a “world-class master-planned community” Edge-on-Hudson will encompass 65 acres along the shore of the Hudson River. The remaining 32 acres of the property, or the east parcel as it is referred to, will be donated to the Village of Sleepy Hollow.

The project has been valued at $1,000,000,000, and with that many zeros it is a joint venture between SunCal, a California-based company, and Diversified Realty, based in New Jersey. Final tallies place the numbers at 1177 condominiums, town-homes and apartments. In addition a 140-room boutique hotel, 135,000 square feet of retail space and 35,000 square feet of office/loft space are to be built. Late this fall or early winter site development is slated to begin. Construction of the first residences in the “Loft District” are scheduled for early 2017.  The “Loft District” will be located near the Metro-North railroad tracks. This first phase will also include portions of a “central park,” townhomes, and a  “village green.” Four future public streets are also planned.

The use of the new light at the 1883 Lighthouse has been seen nightly and it has been 50 years since it shone out onto the Hudson River. A complete renovation of the Lighthouse is anticipated as new grant opportunities and “other funding  options” are explored.