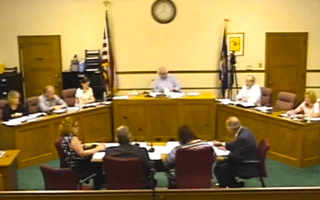 The newly elected Board of Trustees, along with the re-elected Mayor of Sleepy Hollow, righted what many considered an earlier wrong and hired Greg Lobato and several other new police officers. The contentious issue surrounding Lobato played a major part in the Democratic Party’s thumping defeat at the polls in March.

WHEREAS, the Sleepy Hollow Police Department is presently hiring three Uncertified
Police Officers as previously budgeted for; and

WHEREAS, maintaining an adequate staffing level is essential to the efficient operation
of the Sleepy Hollow Police Department; and
WHEREAS, the Police Department has canvassed the candidates list for the position of
police officer; and

WHEREAS, the Mayor, Trustees and Village Administrator whom participated in the
interviewing of these individuals, have endorsed the recommendation of the Chief of
Police;

NOW, THEREFORE, BE IT RESOLVED that the Board of Trustees of the Village of
Sleepy Hollow hereby makes the following appointments to the Sleepy Hollow Police
Department:  Gregory T. Lobato, Angela C. Martello, Reamon W. McGuire at the annual
starting salary of Uncertified Police Officer of $45,930.00;

NOW BE IT FURTHER RESOLVED said appointment is effective July 1st, 2015 and
contingent upon their satisfactory completion of any and all remaining pre-employment
screening tests and/or agility tests and subject to the Westchester County Civil Service
Rules and a probationary period of between twelve (12) to seventy eight (78) weeks.