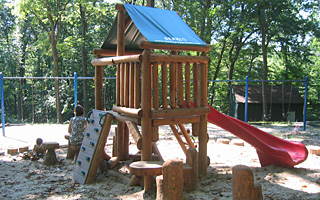 In 2009, many residents of the Webber Park community noticed the continued degradation of the Douglas Park playground and decided to take action. While the surrounding areas of the park were a beautiful representation of the community, the playground was showing signs of age. Nails stuck out of loose boards, parts of the playground were missing, and a playground that was only supposed to stand for 10-15 years with regular maintenance was still being used nearly 20 years later.

Later that year, a group of residents from the Webber Park neighborhood contacted the Village of Sleepy Hollow about possible renovations to Douglas Park and were encouraged to organize; hence creating “Friends of Douglas Park” under the Webber Park Association. Drawing inspiration from Tarrytown’s natural playground at Neperan Park and Tear Drop Park in Manhattan, the group decided on a design incorporating natural materials such as boulders, rocks, and trees into a playground design that mirrored the park’s surroundings while still featuring the usual playground fare.

They have worked closely with the DPW, Village Administrator Anthony Giaccio, Architect Sean McCarthy, Village trustee liaison Barbara Carr, and playground designers Follow the Child through every step of construction, while still finding time to hold volunteer events for the community. As of today, the playground is nearly completed and future plans include a large slide to be incorporated into the rest of the natural playground.

On May 1st, the Webber Park Association will be continuing the work they have already done to improve Douglas Park by holding a collective Family Volunteer Day, where everyone is invited to plant new native plantings, enjoy the completed areas of the park, and help build a labyrinth that will be part of the new natural playground for years to come. The Boy Scouts will be assisting the Sleepy Hollow Environmental Advisory Council to clear trails around the park. Generous donations for the event have been made by local companies: Coffee Labs, Bobby Sue’s Nuts, Sound Earth and local puppeteer Jilly Puppets.  Raindate for the event is 5/22.

See you on the playground!

About the Author: Brendan Bianowicz