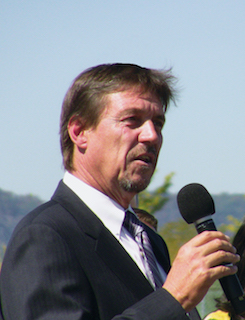 When asked how he came in contact with Jonathan Stein of Diversified Realty, and formerly Roseland Development which worked on much of the Lighthouse Landing project with General Motors and the Village of Sleepy Hollow, Johnson was succinct.

“General Motors reached out to us through a third party broker and introduced us to Jonathan Stein. We [SunCal] eventually became development partners in this project. “In the past twenty years or so, SunCal has transitioned from being a home builder to a large scale land developer,” he added.  At SunCal Johnson is a Corporate Vice President and Director of Land Development for the company based in Irvine, California.

Johnson was not at liberty to divulge the partnership arrangement with Diversified Realty in terms of percentages, however he did mention that he and his staff would be handling the day-to-day activities for the development. That has included planning for Phase 1 by looking at the overall site and seeing what the grading issues were. Due to a new Flood Plan requirement (precipitated by Hurricane Sandy) fill (preferably soil) in the amount of 250,000 cubic yards will need to be added to raise the site 2 additional feet. “We have also taken a lot of time to see how we can take advantage of the 10,000 piles that exist on the site and to what extent we can reuse rather than demolish them. We have spent considerable time to figure out how to maximize the land planning and maximize the benefits from the existing resources on the site,” he said.

Turning our attention to the site we asked Peter Johnson if there was an agreement with Tappan  Zee Constructors (TZC) to accept concrete, from the demolishing of the bridge, for fill. “There is no contract even though there has been a lot of conversation. The timing is a big issue with TZC unable to get the material to us prior to 2017. Also there are more moving parts to this operation than just the 150,000 cubic yards TZC could provide. There would be a significant cost to them to set this project up,” he said.

An interesting note is that 150,000 cubic yards of fill translates to 250,000 tons according to Johnson. When you consider fill brought in by trucks hauling 35 tons per vehicle, the number of trips on Village streets will total 7142. Add an additional 100,000 cubic yards needed to complete the grading at Edge-on-Hudson, and the number of truck trips rises like a helium-filled balloon.

When asked if there was an effort to get fill to the site via barges on the Hudson River or with rail at Metro North, Johnson noted, “We are looking into getting the fill by barges. If that happens we might not need the TZC. Each barge would take 29 trucks off of the road. As for Metro North bringing in fill, loading and unloading would be costly and a trestle would have to be built.” Of note is that regardless of the method of fill arriving in Sleepy Hollow, Johnson wants it all to be clean fill even though certain areas on the site do not require clean fill.

Regarding the start date for the approved Phase 1 site plan, a temporary bridge across the railroad tracks is being installed and site work, along with demolition and grading, will take place within 30-60 days. The completion date for Phase I (which includes 308 rental units) is in 2018, however, a specific month has not been set. The estimated cost to construct Phase 1 has not been determined, although the figure of $700,000,000-plus has been given as an overall cost for Edge-on-Hudson.

The Phase 2 site plan will be submitted to the Village of Sleepy Hollow sometime this summer, according to Johnson. He was unable to give the number of residential units planned for Phase 2 because he mentioned redesigning the architecture so that roughly one-half of them would not be looking out their windows into a parking lot. Phase 2 will also include commercial space and waterfront amenities as well.

Moving on to the time frame for project completion, Edge-on-Hudson will take anywhere from 8-10 years and will be market driven. When asked if he anticipated selling any portion of the undeveloped land, Johnson said, “Currently we don’t anticipate that, but things change.”

Since the original site plan for the development of the former General Motors site in 2001, much has changed, and Peter Johnson knows 2016 is a much different time. “The original site plan had retail stores placed where they wouldn’t be today. There was also a movie theatre, and does that make sense today? We have to keep up [to date] in development. There’s always going to be a better plan. We have to evaluate the demand for a hotel, conference center and movie theatre. We’re going to be here for 10 years, and it’s in our interests to do what’s best and do this by looking at the Village,” Johnson said.

The conversation ended by Peter Johnson answering the question of how he would characterize the Village’s approval process so far. “The Village has been very cooperative and we both have worked through growing pains. It has been a learning curve for both of us. They have helped us move forward,” he concluded.

Note: At the time River Journal went to press the following information was forwarded regarding the taxes Edge-on-Hudson has paid or money that has been put in escrow to be paid.

• $11.5 million to The Village of Sleepy Hollow for new athletic fields on the East Parcel, new DPW facility, or other uses the Village earmarks.  Edge-On-Hudson has now made its first payment of $1.725 million towards this total.

• $650,000 towards the Village of Sleepy Hollow’s new water reservoir system.  Edge-On-Hudson has completed this payment.

• $384,000 payment to the Village of Tarrytown for traffic improvement measures designed to offset impacts from Edge-On-Hudson.  This payment has been made in escrow.

• $72,000 to the Village of Sleepy Hollow for eventual repaving of Beekman Avenue.  This payment has been made in escrow.