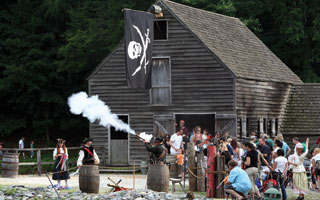 Gangs of blackbeards and beauties will be swashbuckling their way though Sleepy Hollow this summer as Historic Hudson Valley expands to seven days from three its popular, family-friendly event called “Pirates of the Hudson: The Siege of Sleepy Hollow.” Kicking off the weekend of June 30 and July 1, the event continues July 4-8, from 2-8 pm each day, with the last admission at 6 pm. Tickets, available online  at www.hudsonvalley.org, are limited and last year’s three event days sold out in advance.

Produced by the same creative team behind the October smash hits of Horseman’s Hollow and the Great Jack O’Lantern Blaze, Pirates of the Hudson features a mother lode of activity including live pirate music courtesy of the Brigands and the Rogue Blades, gypsy sword dancers, and other entertaining scallywags who will engage the crowd, trying to get as many as possible to “go on the account” and pledge to live forever more as a pirate.

“Once you go on the account, you get branded as a pirate and immediately begin training,” said Lance Hallowell, the event’s creative director.

Once “branded,” pirate recruits get to practice proper pirate behavior like sword fighting and musket handling. Pirate-for-life or not, festival attendees can enjoy games like Davy Jones’ Revenge, where you can test your aim while trying to sink a ship. Visitors can explore Dr. Grymm’s museum of oddities, featuring sea mysteries including not one, but two “real-life” captured mermaids.

Kids can get a temporary glitter tattoo from a professional artist in Molly Rogers’ Tattoo Hut, take part in Princess Marina’s treasure hunt, wiggle their way through a huge pirate shipwreck, and learn to act and mix it up like a pirate.

A blacksmith will handcraft tools of the pirate trade like grappling hooks and boarding axes. 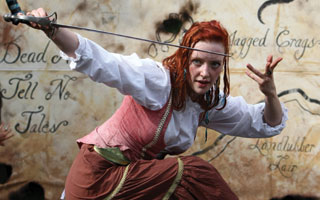 In all, more than 40 pirates and buccaneers will be onsite. Pirates of the Hudson showcases the merchant history of Philipsburg Manor — originally the seat of a 52,000-acre commercial empire — through the lens of a hearty pirate festival.

“As merchants heavily involved in the trans-Atlantic trade, the Philipse family had extensive dealings with pirates and privateers,” said Thom Thacker, site director of Philipsburg Manor. “This event is a fun way to celebrate that history and make those connections for visitors in a festival atmosphere.”

Draft brews from event sponsor Captain Lawrence Brewing Company of Elmsford will be available, as well as a multitude of pirate-themed culinary creations from Tastefully Yours of Briarcliff Manor.

The Thieves Market gives visitors the opportunity to bag exclusive Pirates of the Hudson booty including t-shirts, mugs, placemats, postcards, and magnets, as well as classic pirate accessories such as eye patches, hooks, swords, jewelry, and bandannas. Other offerings include pirate chests, pirate watches, pirate cookies, pirate flags, huge octopus and colorful blowfish stuffed animals, and a comprehensive selection of books for all ages.

Event admission is by advance timed ticket and all experiences are continuous throughout the afternoon. Tickets are available on the hour beginning at 2 pm each day. The last admission is at 6 pm. Ticket prices are $16 for adults and $12 for children under 18. Members of Historic Hudson Valley receive a $5 discount per ticket. Pirates of the Hudson is held rain or shine. Proceeds benefit Historic Hudson Valley, the Tarrytown-based non-profit educational organization which owns and operates Philipsburg Manor.

[blockquote class=blue]You can follow the event on Facebook at www.facebook.com/ PiratesHudson and on Twitter www.twitter.com/HHValley using hashtag #PiratesHudson
Philipsburg Manor is at 381 North Broadway (Route 9) in Sleepy Hollow. For information and tickets: 914-631-8200, www.hudsonvalley.org.[/blockquote]