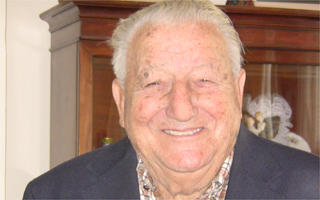 Listening to Chick Galella talk about his birth ninety years ago brings a smile. “My mother wasn’t too happy about it. She missed New Year’s Eve,” he said.  He was born January 1, 1921 in New York City. He will turn ninety-one this New Year’s Day and many are happy about that.

Chick Galella has for so very long been concerned and committed to the well-being of others. He has a list of accomplishments which date back to the beginning of World War II and the attack on Pearl Harbor. He was stationed at Pearl Harbor with the 443rd Signal Corps. His span of service included five years in the Pacific theater where he reached the highest grade an enlisted man can achieve Sergeant Major. He received the Bronze Star Medal [the Nation’s 4th highest combat award] for Meritorious Service and participated in the Battle of Okinawa which was “the largest amphibious invasion of the Pacific campaign and the last major campaign of the Pacific War.”

His service to country has been equaled by his service to community. He was a Trustee in the Village of North Tarrytown for 10 years. He was also the Fire Commissioner for the Village as well. He chaired the Immaculate Conception Bazaar for 20 years and still dedicates time as a Trustee to that Roman Catholic parish. For the past 7 years he has been invited to speak to  students throughout Westchester County’s schools about his life experiences and most specifically about those at Pearl Harbor.

By his own account he is most proud of one act which again reflects a commitment to others. “I was able to get the waterfront park named after my childhood friend who grew up on Beekman Avenue and was killed at Pearl Harbor. His name was John Horan and Horan’s Landing was dedicated in his memory,” he said.

Congratulations Armando “Chick” Galella. Married to his wife, Leda, for sixty-four years, he has repeatedly defined the word “goodness.”  In essence he has been the Man of the Year for a long time.