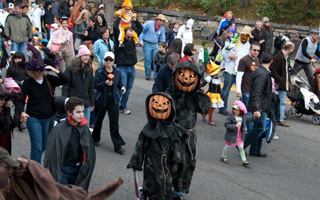 Joe Archino can be forgiven if he’s feeling like George Bailey at the end of It’s a Wonderful Life. The Irvington Superintendent of Recreation and Parks was staring at a 2011/2012 budget that demanded massive cuts, and some cherished Village traditions were on the verge of being eliminated, when the strangest thing happened.

The people of the Village came out of nowhere to save the day.

“Our cuts were supposed to be in the area of over $140,000,” said Archino. “Instead of making that much in cuts, we made a proposal to the Village Board that we would cut somewhere in the neighborhood of $70,000 and then generate an additional $70,000 in new revenue.” However, even cutting $70,000 meant making painful sacrifices. “The one area where we had no choice except to look at it, were those programs that don’t generate any revenue. The problem with all of our special events is none of them generate any revenue, so they were a target.” 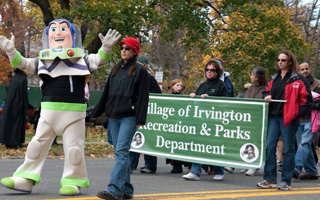 Just like that, special events village-wide were wiped off the schedule. First to go were the July 4th Fireworks. Next in line were: the annual Halloween Parade, the Halloween Hayride, the Peter Oley Turkey Trot, scarecrow and pumpkin decorating, and the holiday delivery program for seniors and families in need. Basically, many of the very things that make Irvington such a special place to live in were scheduled to be sacrificed on the altar of fiscal discipline. “We always hoped there would be a way to get them back,” Archino noted. “We just weren’t sure how that was going to happen.”

Alarmed at the prospect of losing the heart and soul of the Irvington experience, Mayor Brian Smith and the Village Board formed the FACE Committee (Fundraising And Community Events). The committee was tasked with finding ways to assist in raising funds for community events, and the results looked promising. “The [FACE] committee set about to identify potential sponsors for events,” said Village Administrator Lawrence Schopfer, “and they were fruitful in their initial efforts.”  It also looked like their success would come too late to save the events of 2011. “That group has got a lot of potential for us going forward, the problem with them is that they need some time to get up and running. So although there was some hope out there, we just didn’t know what to do this season.” 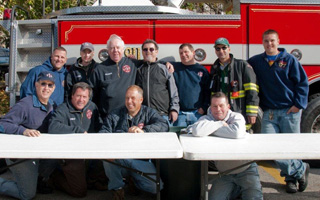 That’s when Clarence the Angel came down from the Heavens — or in this case, several Clarences. The first angel to bestow a miracle was the Irvington Fire Company, the social and community service organization connected to the Village fire department. All it took was one call and events were set into motion that would lead to the organization contributing up to $7,000 to sponsor the annual Halloween Parade. “Joe came to us and asked if there was any possibility the fire department could help financially,” said Ex-Fire Chief and current Irvington Fire Company President Jim Brennen. “We agreed through the company… that yes, we would fund the whole thing and take credit for the sponsorship to help out so [the parade] wouldn’t be cancelled.”

The generous members of the Irvington Fire Company were so taken with the idea to help the Village in its time of need, that the vote wasn’t even close. Says Brennen, “We put it to our members… and it was seconded and unanimously approved – with no ‘nays’ involved.”

With one event saved, Archino moved on to the next “must save” item on his list – the Peter Oley Turkey Trot. But while he had been able to make the connection with the Fire Company through his own network of friends, on this one, he would need help. That help came from longtime Village resident and co-leader of Community Girl Scouting in Irvington, Allyson Felix. Felix, a member of the new FACE committee, was in a good position to know the needs of the Village, and she saw a fit right away. She explained, “When I heard some of the things that were not going to happen, I thought, ‘Wow, this would be a great opportunity for the Girl Scouts.’”  The Girl Scouts of Irvington stepped in to sponsor the Turkey Trot, pledging $3,500 towards the cost of the annual race. (The rest of the funds will be raised from entrance fees.) 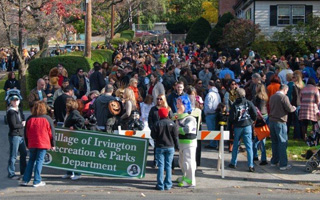 “[The Turkey Trot] has a long, historical significance. I also knew Peter Oley and thought the world of him. It calls attention to running, which is a healthy exercise, or walking, or just being out in the environment. So there are a lot of reasons why we wanted to be involved,” Felix added. “The Girl Scouts are not allowed to donate to other organizations, so this works for us because we’re going to be partnering with the Recreation Department and will actually be undertaking the responsibility [for this happening.]

Just when Archino thought the miracle had run its course, another neighbor came unexpectedly through the door. As word spread among people in the Village that the Recreation Department needed help, it reached the ears of Sunnyside Federal Bank President Tim Sullivan. Archino and his staff met with the bank, laid out a proposal, and more or less walked out of there with a “yes” and a pledge of $4,000 as Sunnyside Federal Bank will now be sponsoring the much loved Halloween Hayride. Not only that, but Sullivan and his team will look into how they can make a lasting contribution to the Village moving forward.

For Archino, it was almost too good to be true. “In 72 hours, we were able to get $14,500,” he said in amazement. Still, Archino knows that he can’t rest on his laurels. “Today we’re having all of our events. It’s going to be a good fall, then we’ll figure out tomorrow.”

Hopefully, by the time Archino’s tomorrow rolls around, the FACE committee will have had a chance to get up and running. They are already looking at a number of possible fundraising events, including a spring or summer carnival, and partnering with an outside organization on a raffle – an action that would actually be against the law had the Village Board not moved swiftly to rectify the situation. “Believe it or not, although the state law allows for raffles,  the local community has to adopt a local law allowing for the raffles to take place, and the Village of Irvington had never had that on our books,” said Schopfer. “But the law that the Village Board adopted enables and allows raffles to take place in Irvington by organizations that are based in the Village. That law actually has to go out to referendum, it has to be approved by the voters… we expect that to be on the ballot November 8, in the general election this year.”

Whatever happens with the FACE Committee or other possible as-yet-unknown benefactors, Archino will continue to work tirelessly to find ways to bring the traditional special holiday events to Irvington. “We’ve taken significant cuts the past three years and this has been the toughest we’ve ever been through. It would have been easy to just sit back and let things happen, but we took a real positive, keep-thinking-outside-of-the-box [attitude]… and it’s real nice to see how it’s come out and see how many people really cared about helping us to keep these things going.”

There will be many angels getting their wings in Irvington this year, and the trials and tribulations that Archino and his staff have gone through to get to this point will all seem like a bad dream. “Most of the community probably won’t even realize what happened or what we went through to get this to happen,” he said. “They’ll just know their kids are smiling.”  ©