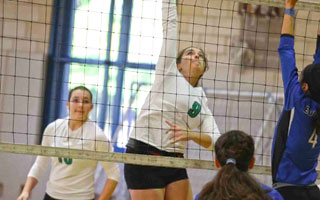 The undefeated girls soccer team, at 17-0, won their Class B quarterfinal game 5-1 against Ardsley, thanks to sophomore Zoe Maxwell’s four goals. The team has won the league championship and advances to the semifinal game against Briarcliff on Thursday, Oct. 29. The game is scheduled for 3 p.m. at the lower turf field at Washington Irving School in Tarrytown.

The varsity girls and boys cross-country teams will be competing at the Sectional Championship/State Qualifier meet at Bowdoin Park in Wappingers Falls
on Saturday, Nov. 7. The boys race has been scheduled for 11 a.m., and the girls race will be held at 1 p.m. Over the past weekend, the boys team placed eighth overall in the Westchester County Championships. That placement was Irvington’s best team finish since 2009. Sophomore Luke Carmosino took third place overall, which was the second-best finish in school history, second only to Julian Saliani’s first-place finish in 2009.

The girls volleyball team finished their regular season with a 12-5 overall record and an impressive 8-0 in league play, which netted them the league championship. The team enters the Section One Class B tournament as the No. 5 seed and will host the No. 12 seed, North Salem. The game will take place on Friday, Oct. 30 at 4:30 p.m. in the Campus Gym