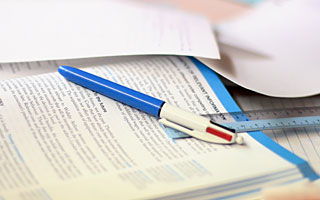 Last month the Superintendent of the Irvington school district asked for Board approval to hire a new full-time curriculum administrator. Because Dr. Matusiak wants to begin the hiring process right away, the Board agreed to vote on Tuesday, December 21. A “yes” vote will mean the position is locked-in and cannot be cut or scaled back during the budget process this spring.

We believe the proposed position is unwise on a number of grounds, including student achievement, cost, and high turnover in this position in the past.

Now that we have entered a period of declining enrollments, with the administration projecting a drop to 1643 students by 2015, a new administrative hire seems unwarranted on demographic grounds alone. Although, it’s especially important to carefully vet requests for new positions in the central administration because extensive peer-reviewed research shows that a centralized administration hurts student achievement. In their now-classic study of high school quality, John Chubb and Terry Moe found that one of the main reasons suburban public schools produce better student achievement than urban schools is that teachers and principals in the suburbs have far more autonomy.  The case for charter schools, whose principals have more freedom of action than principals in traditional public schools, was based partly on that body of research.

Here in Irvington, there is no evidence that the curriculum position has had a positive effect on student achievement.

It was our first curriculum administrator, Jennifer Dolan-Waldman, who adopted Math Trailblazers, a curriculum mathematicians do not support. Ms. Dolan-Waldman was not a math teacher, does not appear to have consulted professional mathematicians in making her choice, and did not heed the objections of parents with expertise in mathematics.

She also failed to address a mathematician’s analysis of Trailblazers for the state of California, which concluded that Trailblazers was not suitable for children in California’s school system: “In a very real sense, [Trailblazers] is grossly inaccurate .. .   [Trailblazers] gives the impression that mathematics ‘works’ in ways quite differently than how it does.”

All subsequent curriculum administrators, at least two of whom were English teachers, have supported Trailblazers in the face of continuing objections from parents. They have also neglected to ask Scarsdale, Dobbs Ferry, and Hastings why they have abandoned the series.

The upshot of the district’s 6-year experiment with Math Trailblazers: last year our curriculum administrator reported to the Board that students entering the middle school do not know their math facts and are not proficient in long division. In response, the district hired a consultant from Bedford to advise on curriculum and train teachers.

But hiring consultants does not solve our problem:  a succession of curriculum administrators without the necessary expertise in math choosing our math curriculum. The resulting turmoil and confusion has been bad for students. A glaring example: in 2005, the curriculum administrator told parents he did not know whether Trailblazers students would be able to take calculus in high school. This lack of clarity on the question of what students will learn and when they will learn it persists. Last school year the Board discussed the Federal Department of Education’s recommendation that students take algebra in the 8th grade, which is the international standard. When our curriculum administrator reported that only 41% of Irvington’s 8th grade students were studying algebra and was asked whether Trailblazers could increase that number, she answered, “I don’t know.”

The fact is, one person cannot be an expert in mathematics, science, English language arts, history/social science, and foreign languages. That is undoubtedly why good private and parochial schools rely on knowledgeable department chairs to choose textbooks instead of assigning that task to one central administrator.

Cost: Our district is experiencing severe financial strains, several of which were discussed last month. (See: https://www.riverjournalonline.com/villages/irvington/1682-irvington-school-districts-financial-challenges). As of this writing, we face at least a 6% tax increase — and probably more — to fund our programs as currently structured.

A new administrator would likely start at about $175,000, so our total cost including benefits would be, say, $225,000 not counting assistants. That money will have to come from somewhere, and something else will have to be cut. We do not endorse expanding administration relative to enrollment in the best of times and certainly not now, when hiring new administrators will mean laying off teachers.

We must also take into account the fact that a starting salary of $175,000 is just the beginning. Salaries in public schools rise much more rapidly than salaries in the private sector, and public sector benefits are more generous as well. It’s time for school districts and other government entities to begin taking the long view: what will a new position cost over the next couple of decades, and is a new position the best use of our resources?

Last but not least, the fact that a curriculum administrator would have to be considered for tenure should also give us pause. Once the new hire receives tenure, we would have the same person choosing curricula for potentially the next twenty-five years — another reason why department heads should be in charge. Department chairs are tenured as teachers, not administrators.

High turnover in the curriculum administrator position: The first person to hold the position was Ms. Dolan-Waldman, who began work in 2000. Since Dr. Matusiak joined the district in 2004, four people have held the curriculum administrator/deputy superintendent position: Ralph Napolitano (2004-2006); James Hunderfund (2 weeks in the fall of 2007); Greer Fischer (winter 2007 through 2009); and Mary Ann Doyle (2009 – 2011). It seems safe to say that the position has not been working for our district.

If the proposed position were put to a referendum, it would likely be voted down. So we hope that on this issue, the Administration and Board will listen to public opinion.