Longtime Briarcliff Manor resident Tom Leihbacher has published his second book, Summer Up!, a novel set in his hometown.

Metro-North commuters might spot Leihbacher working on his books during his train ride to Manhattan, where he’s in the media/advertising business.

Here’s a Q&A with Leihbacher, which has been condensed for brevity.

River Journal: Briarcliff Manor’s Tree Streets are the setting for your stories. What’s at the heart of your special affection for your neighborhood?

Tom Leihbacher: It’s a village largely characterized by long, winding roads sweeping through wooded residential areas with large houses and yards. In contrast to that, there also is a neighborhood where the houses are close together. Many of the streets are named after species of trees such as Maple Road, Ash Road and Oak Road. It’s a quaint, close-knit neighborhood with unique homes, a playground, The Pocantico River, hundred-foot-tall trees and young families with school-aged children. This is where I grew up and, since my first two books were period piece stories set in the early 1970s, I was able to draw from my own memories.

RJ: How has the village changed during your three-plus decades here? 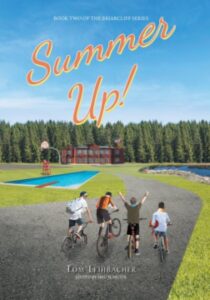 TL: We used to have The King’s College and Briarcliff College, which provided a youthful presence, not to mention a pool of babysitters. The original Briarcliff Manor school building built in 1909 was eventually torn down. Adjacent to the school property was a large pine forest. When the Putnam Line railroad was shut down and Route 100 was built in its place, roadway drainage changed the water table, which resulted in standing water throughout the forest. It now is more of a swampy wetland area. Cherished businesses like Pete’s Stationery, The Briars, The Penny Candy Store and the Greasy Spoon are also no longer in business.

Having said all that, the village is in great shape and is still characterized by families with school-aged children, close friendships, youth sports, performing arts events and community activities.

RJ: Your books follow a character named Charlie Riverton and his pals. How closely is Charlie modeled on yourself, your experiences as a kid, and your own group of friends growing up?

TL: Many of the characters are indeed based on people I’ve known. For the Charlie character, I needed a young boy who was kind of too good to be true, so I took characteristics from three of my closest friends and combined them to create the essential nature of Charlie’s personality. While I am not personally represented in Charlie or any other characters, I did subject Charlie and his group of buddies to the same kinds of experiences that me and my friends had while growing up. We played sports, got into certain kinds of mischief. At the same time, many characters are real people including Reverend Higgins (my father in-law,) Coach Cadman, Mr. Weldon, Officer DiLoreto.

RJ:  How does your faith come into play in your work?

TL: My faith is the foundation of my life, perspectives, pursuits, priorities and interests. That’s not to say that I consider myself to be a particularly good Christian. However, in faith, I do strive to walk in step with God. In turn, when I drafted A Gift Most Rare, my primary goal was to write a God-honoring holiday story. When I wrote the sequel, Summer Up!, my goal was to write a God-honoring summer tale. I grew up attending the Briarcliff Congregational Church. These days, I attend Faith Lutheran Brethren Church.

Tom Leihbacher’s books are available through Amazon, Barnesandnoble.com, iTunes and in select bookstores.

More about the author: tomleihbacher.com