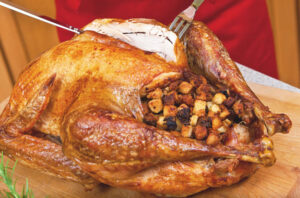 What is it with stuffing anyway?

If you think Thanksgiving is known for cooking up family squabbles over contentious topics like politics and whether the Knicks and Jets are really professional sports franchises, stuffing’s no slouch either when it comes to heated arguments over whether the side is best served inside or outside the carcass.

Oops! Excuse me. Before I am dressed down by my Southern friends reading this, just make believe instead of stuffing you saw dressing, which I know is your decorous euphemism for that edible papier mache nesting inside the bird.

DORMOUSE, ANYONE?
One appetizing origin story of stuffing is that an ancient chef named Apicius, who was hot stuff circa 1 anno domini, specialized in stuff like stuffed chicken, rabbit, pig, and that long-lost delicacy, dormouse (no doubt served with cheese).

Apicius was nothing if not creative, and a mite flighty, you might say. For instance, he is said to have stuffed a suckling pig with small birds. I’m sure it fell on the palate light as a feather.

Fun fact: Chef Apicius is famous for authoring “On the Subject of Cooking” (no longer available on Amazon).

WAY, WAY BACK
With all due respect to Chef Apicius, he’s a piker when it comes to how far back stuffing first became a thing that we still gobble up for Thanksgiving.

For a more scholarly, and juicy, history, let’s set the wayback machine several millennia, to 1700 B.C. An archaeological dig in the mideast turned up a clay tablet from that epoch, and on it was etched poultry recipes, as reported in The Wall Street Journal.

WELL BREAD
One recipe they were savoring in 1700 B.C., as seen on the unearthed rock of ages, was roasted bird with a side of “specially flavored soft bread” (which rules out matzoh). “This may have been,” declares the Journal, “the earliest precursor to Thanksgiving stuffing.”

Our stuffing concoctions have come a long way since then. In fact, The Guiness Book of World Records in 2010 cited this as  “largest item on any menu in the world” — a Bedouin wedding dish of roasted camel stuffed with sheep, chickens, fish and eggs.

Just goes to prove that you can always whip up something quick and imaginative when stores are out of Stove Top Stuffing. Some might even call it (with apologies to Bogie) the stuffing that dreams are made of. 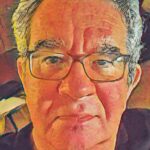