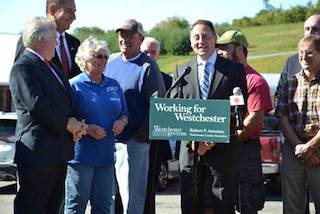 The county’s contribution is the final financial piece of a broader $2.94 million effort to preserve the privately owned and operated working farm and educational resource, which is located within the Croton Reservoir watershed.

“Preserving the health and character of our environment and open spaces is a fundamental function of good government,” said Astorino. “I am proud to stand with legislators on both sides of the aisle to make sure Stuart’s Farm remains free from development and is able to provide vital economic and educational services for years to come.”

Under the terms of the bipartisan proposal that Astorino is sending to the Board of Legislators, Westchester’s contribution would be added to those of:

Stuart’s Farm, the oldest working farm in Westchester County that dates back to 1828, is a part of Westchester’s 300 year agricultural heritage and the 7,400 acres of working farmland in Westchester. The money will be used to purchase a conservation easement from the Stuarts that will prohibit any future development that is inconsistent with agricultural use. Westchester Land Trust is leading the project, and will hold the conservation easement, along with the County and Town. The state grant was awarded through a competitive process that assessed the importance of the land and the viability of the farm and business operation. The Stuart family will continue to own and operate the farm, which attracts more than 25,000 people per year from the region.

Bob Stuart noted that his children, in-laws and grandchildren all worked year-round on the farm, where they grow apples, peaches and vegetables during the growing season, while also running a bakery and selling Christmas trees in the winter.

“This is a simple family farm and I love what I do,” said Stuart, owner of the farm. “This is an island of the past. There aren’t many family farms left, so it’s important that we hang on to them because once a farm is gone, it doesn’t get replaced, and future generations won’t know what life on a farm is like.”

Lori Ensinger, president of the Westchester Land Trust, was pleased the agreement was moving forward, and called the farm an iconic part of Westchester’s history.

“We are deeply grateful to be working with Westchester County, and all our partners to forever preserve this iconic part of Westchester’s agricultural legacy,” Ensinger said. “Today’s announcement is the last critical step to complete the funding for this significant project.”

There is bipartisan support from members of the Board of Legislators. The county portion of the easement would be financed with county bonds and requires 12 votes from the 17-member board.

“This investment balances the need to preserve open space with pressure for land development in Westchester County,” said Board of Legislators Chairman Michael Kaplowitz, D-Somers. “Stuart’s Farm has been in operation for nearly 200 years, which makes it one of longest operating businesses in Westchester County. Stuart’s Farm and other agricultural operations are important for the Northern Westchester economy and environment. I urge my colleagues to join me in supporting this investment.”

“Agricultural enterprises are critical to the economy, environment and quality of life in Northern Westchester County,” Corcoran said. “Big chain stores and escalating land values threaten the viability of traditional family farms in suburban areas. Stuart’s Farm is a beloved part of our local history and we need to support them and other farmers to ensure they are a beloved part of our children’s future.”

Somers Town Supervisor Rick Morrissey said the historic property is a cherished part of the community.

“The Town of Somers is pleased to be part of the partnership along with Westchester County to preserve Stuart’s Farm for all future residents of Westchester County,” said Supervisor Morrissey. “Somers cherishes its rural characteristics and the preservation of the historic Stuart’s Farm is in keeping with the vision we have for the Town of Somers.”

The proposal has already been approved by the Westchester County Planning Board, which noted that the easement would “nurture the economic climate, preserve and protect the county’s natural resources and environment, and define and protect community character.”