“Three independent groups have looked at the county’s finances and have re-affirmed that we are on solid fiscal footing because of our responsible fiscal management,” Astorino said. “Westchester County remains the highest rated county in New York State for good reason, and that enables us to save money for taxpayers.”

The county’s high bond ratings allow taxpayers to save millions of dollars a year on interest costs associated with borrowing along with refinancing bonds.

While all three ratings agencies noted the challenges faced by the county, such as uncertain sales tax revenue and high pension expenses, they each praised the county’s careful management of its finances.

S&P cited the county’s economy, financial policies and practices, budgetary flexibility, liquidity and institutional framework, though raised concerns about how the county would be affected by federal tax reform – should it be passed by Congress – potentially affecting state and local income tax and mortgage deductions. S&P rated Westchester County well compared with the federal government.

“We rate Westchester County higher than the sovereign because we believe the county can maintain better credit characteristics than the U.S. in a stress scenario, based on its locally derived revenue base and our view that pledged revenue supporting debt service on the bonds is at limited risk of negative foreign intervention,” S&P wrote.

Moody’s Investment Services said the county has maintained the second highest rating of Aa1. Moody’s said the county’s “fiscal management is very conservative in its expenditures” and “frequently monitors the budget, identifies shortfalls and works with departments to close gaps.”

Moody’s and Fitch both gave the county a stable outlook while S&P said there was about a 30 percent chance of a negative scenario playing out in the future. 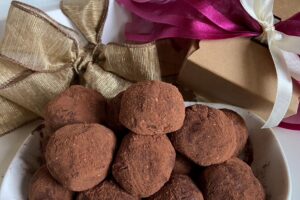 Too Good to be This Easy – Homemade Chocolate Truffles