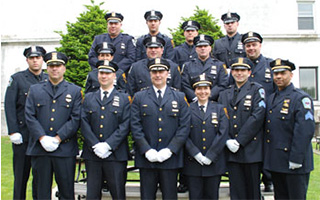 County will dispatch village police during overnight shift, saving costs and keeping officers on patrol.  The Department of Public Safety will handle communications and dispatch duties for the Tuckahoe Police Department on the midnight shift under a proposed shared services agreement between Westchester County and the village of Tuckahoe, County Executive Robert P. Astorino and County Legislator Sheila Marcotte announced today.

The county began working on the agreement over the summer in response to requests from Tuckahoe Police Chief John Costanzo and Mayor Steven Ecklond who were seeking ways to lower costs without impacting police patrols.

“This agreement enables the Tuckahoe Police Department to keep the same number of patrol officers on the street during the midnight shift while reducing costs for its taxpayers,” Astorino said. “At the same time, there is no cost incurred by the county. This is another example of how the county works regularly with our municipalities to share services and save taxpayer dollars.”

Beginning Dec. 3, all 911 calls or other telephone calls from the public to the Tuckahoe Police Department from midnight to 7:40 a.m., seven days a week, will be automatically forwarded to the county’s Department of Public Safety, which will then dispatch Tuckahoe officers as needed. This will eliminate the need for a desk officer in Tuckahoe and allow the village police to continue focusing on street patrols.

In addition, any person who comes to Tuckahoe Police Department headquarters during the overnight hours will be able to contact county police through a telephone mounted at the front door.  A Tuckahoe police officer would then be dispatched to return to headquarters.

The county can provide the service to Tuckahoe at no cost because the small volume of calls can be handled by current personnel, Astorino said.
“I am thankful to our County Legislator Sheila Marcotte and County Executive Rob Astorino for their cooperation and support for this very important shared service initiative,” Mayor Ecklond said. “Having our police on the street instead of behind the desk will provide much greater efficiency to the midnight tour. I also wish to thank Commissioner Longworth of the Westchester County Department of Public Safety and Tuckahoe Police Chief Costanzo for their efforts in getting this great initiative off the ground.”

Marcotte added: “In these times when we turn over every stone looking for efficiencies, the shared dispatch service provided by the county will continue to allow the Tuckahoe Police Department to maintain the high level of police services our residents have always enjoyed.”