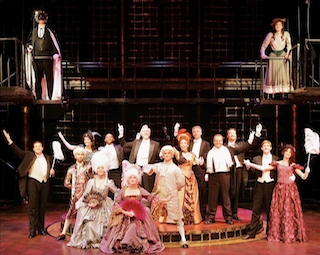 Arthur Kopit/ Maury Yeston’s “PHANTOM” made its New York Premiere here at WBT in 1992. During our record breaking nine- month run, over 120,000 people attended. Night after night, audiences rose to their feet for the stunning musical thriller. The original production was directed by William Pullinsi and starred Robert Cuccioli as the Phantom and Glory Crampton as Christine Daee.

“PHANTOM” was written by Arthur Kopit, with music and lyrics by Maury Yeston who were the Tony Award winning collaborators for the Broadway Musi­cal “Nine”.  “PHANTOM” is not to be confused with Andrew Lloyd Webber’s “Phantom of the Opera”, which is currently running on Broadway. Both shows are based on the same Gaston LeRoux novel, with the Webber extravaganza being more like an opera, compl­etely sung. The Yeston/Kop­it “PHANTOM” is more of a traditional Broadway Musical with dia­logue and songs throug­hout.

The show opened here at WBT on July 16th, 1992 to rave reviews. Jacques LeSourd critic from Gannett Suburban Newspapers stated… “There is also a gripping story, richly drawn characters, and music that can break your heart with its beauty… You’ll find none of that in the Broadway ‘Phantom­’…. The rich orches­tra­tions bring to mind ‘Sweeney Todd’ and even the propuls­ive sounds of Philip Glass. This is a score in the grand man­ner”.   Howard Kissel, critic from the New York Daily News said: “The first Genuine Broadway Musical I’ve seen in years and the most genuinely exciting Broadway Musical I’ve seen in years”…”Capturing the genuine ‘Phantom”…” De­spite all its ma­squer­ading, the real thing isn’t on West 44th Street; it’s playing here in Westchester”.  He was referring to our wonderful production of “PHANTOM”! 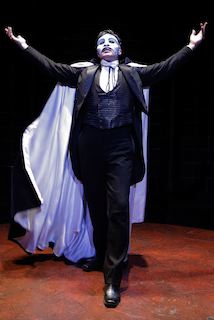 The story revolves around the central character of a man named Erik, (also known as the Phantom) who was born and raised in the cata­combs under the Paris Opera House. Through a series of circum­stances, he takes on as a pupil a young woman named Christ­ine, who has been a street singer. She has a natural talent and a beauti­ful voice, but she lacks the special training to perform in an Opera company. He agrees to take her on as a student with certain condit­ions, the main one being that she will never see his face. After a lot of hard work she eventually auditions for the company and is not only accepted but is given the oppor­tunity to play a principal part in an Opera. Without realizing it, they fall in love with each other. The rela­tionship becomes obsessive and impossi­ble, leading to a stunning conclusion which can only be experi­enced by attending a perfor­mance here at the Westchester Broadway Theatre.

The music and the drama of this piece are extraordinary and should not be missed! From our show that was seen by many members of The Alli­ance for Musical Theatre Producers, came scores of productio­ns around the country. After seeing our production of “PHANTOM”, RCA Victor produced a CD recording of the show. including  WBT cast members, Glory Crampt­on who played Christine, Meg Bussert who played Carlotta, and most of our ensemble. For those of you who have already seen “PHANTOM” we will be adding a few surprises, and if you have only seen it once, it is definite­ly worth seeing a second time

Ticket Prices: Dinner & Show range between $59.00 to $89.00 PLUS TAX depending on the performance chosen. Beverage Service & Gratuities are not included in the ticket price. Discounts are available for children, students, and senior citizens at selected performances. Also check the website for on-going Special Offers!