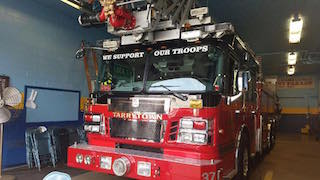 If you’ve ever researched statistics on firefighters, you’d know that in America, where there’s a fire, there will most likely be volunteers. According to the National Fire Protection Association, or NFPA, 69% of firefighters in the United States are volunteers. There are approximately 125 Volunteer Fire Departments in Westchester County alone, while the cumulative number of our towns, cities and villages reaches only 48.

According to the Ossining Fire Department, comprised of 9 companies in 7 firehouses throughout the Village, “These firefighters risk their lives out of service for their community.” The department also quotes 1975 Fire Chief, Gunnar Neilson, as reiterating their strong statement on the matter: “It’s strictly volunteer. When the whistle blows, you go.”

While those numbers seem large, the number of volunteers is diminishing. “We have seen a decline in Tarrytown volunteers over the years,” says 1st Assistant Chief Dave Goldstein.

“I don’t think there is ever such a thing as enough volunteers these days. There used to be waiting lists to join fire companies, now you can’t pass a firehouse without a Volunteers Needed sign out front.”

Nationally, volunteer firefighter recruitment is also on the decline. According to the NFPA, there’s been an 11% decrease in volunteers since the mid-1980s and an increase of career firefighters by approximately 50 percent.

There may be any number of reasons for the decline itself. For Tarrytown, Goldstein says it may be partly to do with the tight budgets of its residents. “Housing is becoming more expensive and membership has to move away.”

According to the Sleepy Hollow Fire Department website, volunteer firefighters “practice what many only preach.” It goes on to say that without them, insurance rates and taxes would have to be increased for the town. This invaluable asset to our communities seems

essential for maintaining life as Rivertown residents know it.

Another factor Goldstein mentions for the decline may be the amount of spare time residents have and how long they estimate being a volunteer will take. “New residents in the Village either don’t know that we are volunteer, or do not believe they have the time to volunteer. You wouldn’t believe how many people move to Tarrytown from the City and believe we are a paid fire department. When we ask them about joining, they tell us they already have a job. When we explain that we are volunteering, we get a confused look followed by the usual, ‘Well I don’t have any time for that’ comment.” 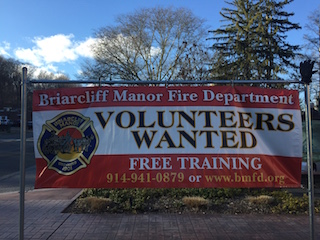 In Briarcliff, Chief Dennis Reilly says that while the fire department has seen a slight increase in volunteers over the past decade, they are always actively seeking new volunteers.  He, like Goldstein believes the problem may be, in part, about time. “A fair number of people work in the City and other jobs outside of town. This, combined with employers who are not receptive to letting their employees be late or miss work for volunteer work, make it difficult for us to get people out for calls during the week.”

In an effort to bring more young Rivertown residents to volunteer, some firehouses have lowered the age of accepted applicants to 16 years old, and Goldstein says it’s necessary. “We are manning 5 firehouses, 24 hours a day, 7 days a week without any pay at all. Let’s face it, it is not just the fire department that needs young members, it is the residents too. No experience required and just a couple of hours a week.” Goldstein says Tarrytown has a “fair amount” of young volunteers, but that more are needed.

Lately, Tarrytown has been focusing on a new-age way of spreading the word about becoming a volunteer. “Our focus lately has been social media. The department has a Facebook and Instagram page that we

update frequently. It lets the community know what we are doing and tries to pull people in to join us.”

Chief Reilly says he has nothing but good things to say about his dedicated volunteers, but acknowledges that times are changing. “It is becoming increasingly difficult for people to give time while juggling a job or two, family, sports and still be able to drop what they are doing when the fire alarm rings.”

You can find volunteer and membership information on all local firehouses by visiting their websites. As for Tarrytown, Goldstein says that all are welcome and anyone interested can get in touch with a fire chief about membership at any time by emailing Chiefs@TarrytownFD.org.