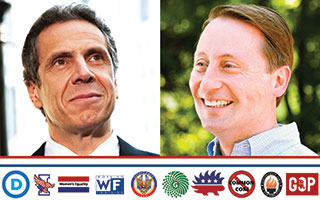 This November 4th, registered New York voters will go to the polls to select their Governor for the next four years. On the Democratic, Working Families Party, Independence and Women’s Equality Party ballot lines, incumbent, Governor Andrew Cuomo, is being challenged by Rob Astorino, Westchester County Executive, on the Republican, Conservative and Stop Common Core ballot lines. Also on the ballot in the 2014 election are Howie Hawkins, the Green Party candidate, Michael McDermott, the Libertarian Party candidate and Steve Cohn, candidate for the Sapient Party.

Two candidates in this election are both Fordham University graduates and Westchester County residents.

Rob Astorino, who lives in Hawthorne, was born in Mt. Vernon in 1967 and grew up in Thornwood. He graduated from Fordham University in 1989.Rob Astorino was elected as Westchester County Executive in November 2009. Prior to his election he worked in the radio industry. He was one of the founders of ESPN radio, Channel 1050 AM in New York City, and was station manager and program director of The Catholic Channel on Sirius-XM Satellite Radio. He also hosted a weekly radio show from St. Patrick’s Cathedral with the Archbishop of New York, Cardinal Edward Egan. Rob Astornio has previously served on the Mount Pleasant Board of Education, the Mount Pleasant Town Board and the Westchester County Board of Legislators.

Andrew Cuomo, who was born in Queens, NY in 1957, has a Mt. Kisco address. He received his BA from Fordham University in 1979, before attending Albany Law School. In 2010 he became the 56th Governor of New York and is running for a second term. Two new parties will be on the ballot lines in this election. Rob Astorino joined with three other Republican candidates for Statewide office to create a Stop Common Core ballot line. Supporters of Stop Common Core, who oppose implementation of Common Core education standards in New York, filed over 62,000 signatures with the New York Board of Elections. New York State law requires a minimum of 15,000 valid signatures, with at least 100 signatures from a majority of the State’s 27 congressional districts.

Republican Senate candidate Joseph Dillon—who is challenging Senator George Latimer, D-Rye—was tossed from that line recently, but several other GOP Senate candidates will appear on it across the State.

Rob Astorino was on the 31-member New NY Bridge Mass Transit Task Force that submitted their final report in February of 2014. Included in the report were recommendations for a bus rapid transit system that can operate on the New NY Bridge. The introduction of that report stated that, “New York State Governor Andrew M. Cuomo recognizes the important role transit plays in connecting communities of the Lower Hudson Valley and understands the importance of replacing the Tappan Zee Bridge (TZB) as quickly and cost effectively as possible.” The task force was asked to make fiscally viable recommendations while meeting the transit needs of the region. The recommendations contained in the final report achieve both of those goals. Earlier this year, in April 2014, it was announced that $20M was earmarked by NY State for a new bus system across the bridge span between Rockland and Westchester. On September 16th, the EPA denied most of New York State’s request for a $511 million low-interest loan to help pay for the Tappan Zee Bridge project, saying the State had planned to use the money almost entirely for construction, rather than enhancing the environment. While it seems that Governor Cuomo agrees with the task force recommendations for a bus rapid transit system, it remains to be seen how the $20 million will be applied to the project. At a meeting held in New Paltz, the Poughkeepsie Journal reports, “He said the rejection of the bulk of the loan wouldn’t have an impact on the progress of the $3.9 billion
construction project, which is scheduled to continue into 2018.” The State has 30 days to appeal the EPA decision.

In an effort to lower property taxes for New York State property owners, under the Cuomo administration, a tax cap law was enacted on June 24, 2011. This law placed new restrictions on how school districts (and municipalities) may increase their tax levies. Three years later, the tax cap is in place, but unfunded mandates continue to increase costs for these schools and municipalities. An unfunded mandate is defined as a statute or regulation that requires a state or local government to perform certain actions, with no money provided for fulfilling the requirements. According to the Westchester County Board
of Legislators, “State-mandated programs are the largest cost centers for Westchester County government.” The NYS Education Department has compiled a more extensive, though still incomplete, list of “mandates that represent the greatest challenges to districts in terms of financial burden and required time/human capital.”

Regarding Medicaid costs, when interviewed about the problem, Astorino stated, “These are the hard choices we have to make.” He continued, “Why are they not covering dentures, let’s say, in California? They’re OK. I mean, I see a lot of healthy people in California, too, but it all gets down to prioritizing. That’s really what it is, because we could sit there and be on a treadmill forever, which is really what this State has done. Nobody wants to make a decision.” In January of 2011, Governor Andrew Cuomo stated, “It is of compelling public importance that the State conduct a fundamental restructuring of its Medicaid program to achieve measurable improvement in health outcomes, sustainable cost control and a more efficient administrative structure.” In May of 2014, when Governor Cuomo “celebrated a deal with the federal government that would provide $8 billion to New York hospitals, he boasted about how that money could be reinvested in the State to transform health care for the 21st century.” According to CapitolNY.com, “Because this is a matching fund, the only way the State can access the cash is if it puts up $8 billion of its own money.”  On the campaign trail in Plattsburgh, NY, Astorino said that while he supports “the 2 percent tax cap that the Cuomo administration implemented, it should become permanent.”  In addition, he continued, “The administration has yet to address meaningful mandate relief. Medicaid reform is one of the biggest potential targets for mandate relief. The system in New York is rife with fraud and corruption, with the result that New York spends more on Medicaid than Texas, Florida and Pennsylvania combined.” He added, “Since counties are required to pay for the State’s spending under Medicaid, they should have more control in areas such as the benefit levels that are available within the county.”

Fracking, or hydraulic fracturing, is the process of extracting natural gas from shale rock layers deep within the earth, and it is one of the most controversial issues around today. The Department of Environmental Conservation’s moratorium on fracking in New York State is in its 7th year, awaiting a health review launched in 2012 that has yet to be completed. In a recent speech, Rob Astorino stated, “President Obama supports hydrofracking. The EPA has said it’s safe. We’ll move forward with the proper environmental safeguards in place and join the 30 other states in harvesting this abundant energy resource beneath the ground… creating tens of thousands of desperately needed good jobs for Upstate… billions in new tax revenue for the State coffers… lower electric rates for all ratepayers… and cleaner air for us all.“ While he supports development of renewable energy sources, such as solar and wind power, Astorino said the reality is that capacity can’t meet the State’s energy demands. Development of natural-gas resources would provide a good stopgap measure until renewables can meet more of the State’s needs. Moments after casting his primary ballot on September 9th in Mt.Kisco, Governor Andrew Cuomo said he would not make an “emotional decision” on fracking. Capitalnewyork.com reported that Governor Cuomo stated, “You can have academics and scientists with research stand up and argue passionately ‘pro’, and you have them arguing passionately against, so it is a complex issue, but I want to do it on the science and not the politics.”

Another controversial issue is the implementation of Common Core standards in our schools. The Common Core standards aim to raise student achievement by standardizing what’s taught in schools across the United States. New York State adopted the Common Core standards in 2010 to qualify for federal Race to the Top funding. More than 30 area school districts have opted out of Race to the Top. Many did so because of the requirement to use “inBloom,” a firm that gathered personal data about students. “inBloom” closed its doors in April this year when NY legislators pulled the plug on its data-mining services. Governor Cuomo handily won the September 9th Democratic primary nomination for Governor, but was strongly challenged by Fordham law professor, Zephyr Teachout, who was adamantly opposed to the Common Core standards in New York. The Blaze.com reports that, “Although Cuomo has called for a review of the implementation of the controversial teaching standards, Teachout wants to end Common Core in New York altogether — and that’s won her points from some very crucial education circles.” Rob Astorino has made opposition to the Common Core a focal point of his campaign.

The Moreland Commission was established by the Governor’s office in July 2013 to investigate public corruption under the Moreland Act and Executive Law Section 63(8) to probe systemic corruption and the appearance of such corruption in state government, political campaigns and elections in New York State. U.S. Attorney Preet Bharara is investigating the Cuomo administration’s March 2014 decision to shut down the commission before it concluded its investigations. Questioned by reporters on October 1st, Governor Cuomo declined to comment about whether he had been contacted by the US Attorney’s Office. Rob
Astorino has made the pending investigation a campaign issue and wants to have a serious discussion about this before the election.

There are also three propositions to decide on in this general election. You can enter your address to find your polling place and build your ballot with an online voters’ guide at the League of Women Voter’s website, http://www.vote411.org. The voters’ guide shows the races on your ballot and compares candidates side-by-side. You can also print out a “ballot” indicating your preferences as a reminder and take it with you to the polls on Election Day.

According to the New York State Board of Elections, you can register to vote in the November 4th general election at your local board of elections or any state agency participating in the National Voter Registration Act, on any business day throughout the year. Your application must have been received by no later than October 10th however. If you have been honorably discharged from the military or have become a naturalized citizen since October 10th, you may register in person at the board of elections up until October 24th.