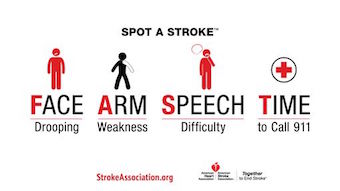 African-Americans have nearly twice the risk for a first-ever stroke than Caucasians, and a much higher death rate from stroke. That is why during Black History Month and American Heart Month in February, the American Stroke Association (ASA) urges the public to learn more about preventing stroke, and learn the warning signs of stroke.

Stroke, the No. 5 cause of death in the U.S. and is a leading cause of disability, occurs when a blood vessel that carries oxygen and nutrients to the brain is either blocked by a clot or bursts. When that happens, part of the brain cannot get the blood (and oxygen) it needs, so it starts to die.

In 2010, stroke claimed the lives of nearly 16,000 African Americans. While stroke can affect anyone at any time, African Americans are at higher risk because they have higher rates of the following health factors:

•    Overweight and obesity:  Among non-Hispanic blacks age 20 and older, 63 percent of men and 77 percent of women are overweight or obese.

•    Diabetes:  African-Americans are more likely to have diabetes than non-Hispanic whites.

At a family outing, her nephew, Aaron Smith, recognized the stroke warning signs he had learned in health class, and told the family to get her medical help fast. Paige had experienced constant headaches prior to her hemorrhagic stroke, a bleeding in the brain from a ruptured artery. She didn’t have her blood pressure checked.

After months of difficult stroke rehabilitation, Paige became independent again. She could take care of her own personal care, speak, walk and, eventually she drive again. She has since earned her Bachelors and Masters degrees, a remarkable feat considering she couldn’t remember things or even speak after her stroke.

“I’d like women to know that you have to take care of yourself just as well as you take care of everything else. You can’t put everyone else first,” she warned, because if you suffer a stroke, “You won’t be able to do anything for them.”

The ASA states that nearly 80% of strokes could be prevented if certain risk factors are controlled. Making small changes like eating better, moving more and quitting smoking can not only reduce your risk for a stroke, but for other chronic illnesses including diabetes, cancer and heart disease.

The simple online questionnaire focuses on seven health behaviors and health factors critical to achieving cardiovascular health: not smoking, eating healthier, getting physically active, achieving and maintaining a healthy weight, managing blood pressure, controlling cholesterol, and reducing blood sugar. The tool provides guidance on next steps to take to improve in health—including scheduling a check-up with their doctor.

To help save lives from stroke, the American Stroke Association encourages everyone to learn the acronym F.A.S.T. to remember stroke symptoms. F.A.S.T. stands for:

·         Face Drooping Does one side of the face droop or is it numb? Ask the person to smile. Is the mouth lopsided or uneven?

·         Arm Weakness Is one arm weak or numb? Ask the person to raise both arms. Does one arm drift downward?

·         Speech Difficulty Is speech slurred, are they unable to speak, or are they hard to understand? Ask the person to repeat a simple sentence, like “the sky is blue.” Is the sentence repeated correctly?

For more information on how to prevent, treat and beat stroke, call 1- 800-4-STROKE or visit www.strokeassociation.org or www.heart.org/highbloodpressure. For free resources for community-based stroke prevention programs, visit http://www.empoweredtoserve.org/. Listen to Beverly Paige’s story at http://bit.ly/FacesofHeartWF.