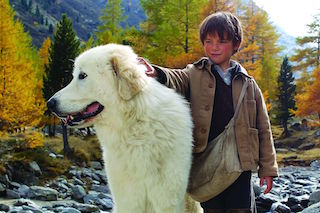 The Jacob Burns Film Center celebrated the launch of its JBFC Kids initiative with screenings of two shorts programs. In attendance at each screening were a handful of elementary and middle schoolers—JBFC students and filmmakers—who were at the theater that day to see their own films, Squidtopia and Doug vs. Doughnut, on a big screen for the first time. These young filmmakers were filled with pride when they saw voting slips being handed out, with their film’s title among all the others. Not only was their movie playing in a theater, it was included along with shorts made by professional filmmakers from all around the world.

Creative experience is at the heart of what JBFC Kids is. Courses and workshops offered at the Jacob Burns Film Center teach storytelling and media making, Family Saturdays @ the Lab is a free event that introduces a different set of innovative activities at each session, and monthly JBFC Kids screenings bring films to life by designing audience activities specifically tailored to each movie.

Take, for instance, November’s screening of the Wes Anderson animated film, Fantastic Mr. Fox. After making fox masks kids got in front of the camera—or, in this case, in front of the iPad—to star as foxes in their own short videos. In October, Faculty and JBFC Kids Curator, Emily Ohara, with help from the Burns’s Art Director, used cardboard boxes to turn part of the movie theater’s gallery space into the underground hideaway from the 2014 film The Boxtrolls. 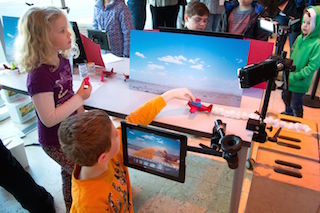 Efforts to allow kids a creative outlet connected to these film screenings will continue in 2017. On February 18, kids can make their own harmonicas as part of the screening of Landfill Harmonic, a documentary about a young group of musicians who make instruments out of items other people have thrown away. Each activity is carefully planned to provide JBFC Kids audiences with a tactile experience, a fun, hands-on link to the worlds they see up on the big screen.

JBFC Kids brings this same level of attention to the free programs they offer for families.

During several months of the year you can drop in to another free program, Family Saturdays @ the Lab, and get a taste of what it’s like to work with a wide variety of media-making tools. An event that regularly brings in over one hundred guests, this past fall saw its best attended session when artist and filmmaker Emily Ann Hoffman assisted participants in the invention of their own characters, designing them out of modeling clay, and helping them make short animated films starring their creations. Hoffman said, “Movie-making, especially animation, can often seem like magic. It was great to see parents and children equally excited about getting a peak behind the curtain and I was blown away by their creations.”  The next two Family Saturdays sessions, each with their own set of unique activities, take place on February 4 and April 1 from 1:00–3:00 pm.

For kids who want a more sustained exploration of media-making, JBFC Kids offers a variety of classes and workshops where participants get an in-depth look at a variety of storytelling techniques. Program and Curriculum Developer Aaron Mace says of Storyville, a class where first and second graders explore photography, animation, video production, audio stories, and game design, “Students have created board games where donuts come to life and try to arrest police officers, they’ve made short films where kids try to catch leprechauns, radio shows of inventors showing off their creations, and written detailed stories inspired by photos their fellow students have taken.”

A stunning variety of creative outlets are available through JBFC Kids, but perhaps what is more stunning is the creativity of the kids themselves. At the inaugural JBFC Kids event, the student film Doug vs. Doughnut was voted the audience favorite, a testament to what kids can do given the skills and a chance.