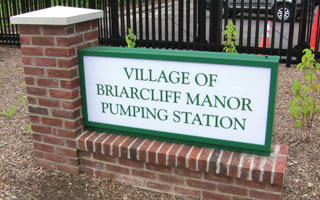 The most abundant compound on Earth and covering approximately 70% of it, this odorless, tasteless and colorless liquid also makes up anywhere from 55-78% of our bodies. Residents in our villages take for granted that it will run through their pipes and appear with the turn of a tap. Their faith in the local water supply is not unfounded, however, over the course of the next several months interruptions and shut downs will occur in the Catskill water supply system that serves and supplies Irvington, Tarrytown, Sleepy Hollow and Briarcliff Manor.

Construction of an ultraviolet plant by New York City on Grasslands Road, and the testing of its operational ability to purify the water coming from the Catskill system has been scheduled, but the dates are not chiseled in stone. The New York State Department of Environmental Protection (DEP) has notified all villages and municipalities on the Catskill system that testing of the new ultraviolet plant will cause shutdowns of the water supply, and to be prepared to use storage tanks until the system reopens.

Irvington appears to have an adequate supply of water, however it is not due to its storage facilities which total 1,800,000 gallons in two tanks. Rather, Irvington draws water through Greenburgh which has access to both the Catskill and Delaware water supply systems.

“We don’t know how long the duration of the shutdowns will be but we have heard anywhere from 12-16 hours. They will be scheduled from late afternoon into mid-morning hours,” noted Briarcliff Village Manager Philip Zegarelli. He added that the Village had 5,000,000 gallons of storage capacity and during the summer months that amount was a little over a day of water needs. Briarcliff however does have the capacity to tap into the Catskill water supply system above the shutdown area through the Town of Mount Pleasant.

Turning to Tarrytown, Village Engineer Michael McGarvey reported to this publication that the first shutdown of the Catskill system was to take place on Tuesday, June 12 at 4pm and reopen on Wednesday, June 13 at 8 a.m. Tarrytown has a 4,900,000 gallon storage capacity within its two tank system. McGarvey’s only concern centered on a prolonged shutdown where water levels would become too low in the larger tank and water pressure lost that was needed to serve the higher elevations in the Village, namely the Crest.

The Village of Sleepy Hollow was unavailable to discuss its water storage capacity and means of supplying its residents during a lengthy Catskill shutdown. Sleepy Hollow has one 880,000 gallon storage tank which by estimates could supply the Village with 8-10 hours of water.

With New York City firmly in control of the Catskill water supply system, villages like ours are considering alternative sources like the Delaware water supply system. Having a backup water supply however is not as easy as it sounds and would require quantitative reasoning in order for the DEP to consider it. With the speed or lack thereof of State agencies it behooves local governments to begin planning now to ensure that H2O continues to flow uninterruptedly.