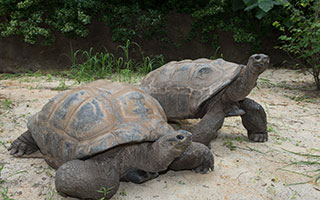 Two giant Aldabra tortoises (Geochelone gigantean) are now grazing outside Zoo Center at the Wildlife Conservation Society’s Bronx Zoo.  Both tortoises are males; one weighs approximately 400 pounds and the other tips the scales at around 600 pounds. 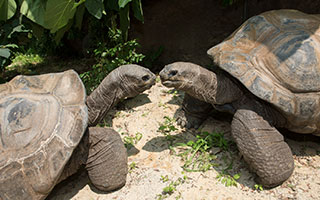 Their exhibit is located at the iconic Zoo Center and resembles their natural habitat with a sandy substrate, lush vegetation, and a freshwater pool.

Besides their impressive size, Aldabra tortoises are thought to live 200 years or more. They have a large domed shell (or carapace), thick limbs that are covered in bony scales, and a long muscular neck. They are terrestrial but can swim. They will enter shallow fresh water and occasionally the ocean to aid temperature regulation.

Aldabra tortoises are one of only two remaining species of giant tortoises; the other being the Galapagos tortoise. Aldabras are native the Aldabra atoll in the Republic of Seychelles and have been introduced to several other islands in the western Indian Ocean.

The International Union for Conservation of Nature (IUCN) classifies giant Aldabra tortoises as Vulnerable, with populations in decline. Estimates indicate there are approximately 100,000 animals remaining in the wild. 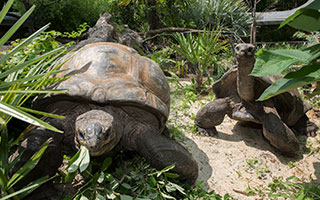 The Wildlife Conservation Society works to save turtles and tortoises around the world. In 2012, WCS launched an organization-wide program to revive some of the most endangered turtle and tortoise species. Efforts include breeding programs at WCS’s zoos in New York, head start programs abroad, and working with governments and communities to save species on the brink of extinction.