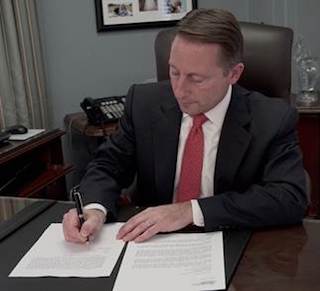 Delivering on a two-term plege to protect taxpayers and deliver essential services, County Executive Robert P. Astorino today vetoed a Board of Legislators budget that included a 2 percent tax hike. In his message to legislators, the County Executive emphasized that he delivered a balanced and fiscally prudent budget that meets the needs and obligations of Westchester residents – without increasing the property tax levy.

“Raising property taxes on the already overburdened taxpayer is the last thing we should be doing right now,” Astorino said. “For the past seven years, working in a bi-partisan manner, we have been able to adopt budgets that have fully provided for services and programs and did not rely on the county’s reserve funds. The board’s budget will hurt taxpayers.”

Astorino cited other flaws in the board’s adopted budget, notably their unnecessary draining of $20 million in reserve funds, which could adversely affect the county’s AAA bond rating, and its omission of a legitimate, long-term and sustainable revenue stream from a proposed public-private partnership to operate the Westchester County Airport, which would have provided the county with $30 million in non-tax revenues for the 2018 budget as well as approximately $5 million in new revenue for the next 39 years. When these factors are coupled with the liklihood of Congress changing the tax code to eliminate or limit the deductibility of local property taxes, the results could be devasting for many Westchester residents.

“With Washington about to cap state and local property tax deductions, the most irresponsible and hypocritical thing to do is to make matters worse by hiking our already sky-high taxes,” Astorino said.

Since taking office in 2010, Astorino has been committed to holding the line on taxes. During his tenure, in fact, the property tax levy actually decreased by 2 percent. The savings to taxpayers has been substantial. If the county had raised the tax levy just 2 percent, the level allowable under the state’s tax cap, the cumulative cost to Westchester taxpayers since Astorino took office would have been $522 million or $1,700 for the median homeowner.