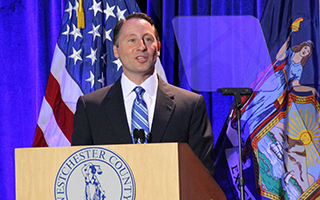 Westchester County Executive Robert P. Astorino today delivered an optimistic and strong message in his annual State of the County address, stating that Westchester was “moving in the right direction” as a result of strong collaboration inside and outside county government and a constant focus on the things that matter most to residents – protecting taxpayers, preserving essential services and promoting economic growth.

For the fifth straight year, Astorino pledged not to increase the county property tax levy.  Astorino has either cut, or held flat, the tax levy each year he has been in office.  In the five years prior to Astorino taking office the tax levy was increased by 17 percent.

“The payoff for taxpayers is that we have remained true to our word,” Astorino said. “We promised tax relief and we’re delivering it.”

Astorino added that he has approached county finances for the past four years with the goal of striking the right balance between what’s nice to have and what’s really needed – the same approach applied by every household in Westchester.

The “progress is phenomenal” is how he described the county’s efforts to meet the terms of the settlement with the United States Department of Housing and Urban Development (HUD) to build 750 units of affordable housing. To date all 31 communities in the settlement have identified potential projects, 403 units have financing in place, 385 units have building permits, and 175 units are already occupied. Astorino thanked all the local communities for their cooperation and efforts.

“Although it falls on deaf ears at HUD every time we mention it,” Astorino said. “Westchester County supports affordable housing.”

Despite the progress, HUD continues to withhold federal block grants – most of the money designated for communities that are not part of the settlement – to use as leverage to force the county to sue its local communities to dismantle local zoning. Astorino has steadfastly refused. Eight studies by the county and one by the federal monitor assigned to the settlement found no evidence of exclusionary zoning based on race or ethnicity.

“Two facts are irrefutable,” Astorino said. “Westchester is ahead of schedule in meeting its obligations to have 750 units of affordable housing built in the settlement’s 31 communities, and that progress would not be possible if the local zoning in those communities did not allow it.”

To solve the impasse with HUD, Astorino proposed that the county create its own community block grant program. The $5 million county initiative would cost each household in Westchester about $1 a year and would replace the funds HUD has been withholding from local communities for projects, such as neighborhood revitalization, sidewalk improvements and affordable housing.

“Instead of being held up by the whims of Washington, Westchester can move forward independently and do the right thing for our communities,” Astorino said. “Most important, it will remove the stranglehold that HUD has been using in its attempt to dismantle our local zoning.”

Following a harsh winter that wreaked havoc on local roads, Astorino declared a “war on potholes” by setting aside $25 million over the next five years for a new initiative called the “County Road and Bridge Urgent Restoration Program.”  Astorino said there was great damage done to county roads and that while the Department of Public Works was out every day fixing potholes on county roads; a greater urgency was needed to fix roads and bridges this spring and in the future.

Another new initiative was the creation of the Immigrant Services Liaison position.  Astorino tapped Katherine Delgado, his Deputy Chief of Staff, to assume the additional duties of serving as a point of contact with local groups and helping new immigrants navigate government bureaucracy in seeking assistance with county services. She will also work with immigrants looking to start new businesses.
Astorino touted the county’s economic progress and pledged to continue future economic growth by fostering: broader municipal cooperation; improved mass transit and transit-oriented development; and tighter links between local colleges and businesses for internship and job opportunities.

Last year, the county’s ParaTransit vans made more than 220,000 trips around the county taking 5,500 disabled residents to jobs, school and other appointments.  The program was expanded last year to include taxi service in New Rochelle, White Plains and Peekskill.  The taxi service saves the county money, almost $500,000 since it started because taxis are significantly cheaper than traditional ParaTransit vans.  It also provides participants a potentially more convenient choice for their transportation needs.  Astorino announced that the taxi service will be expanded to Yonkers in June.

Astorino lauded the county’s ongoing Safer Communities initiative.  Launched in response to the Newtown tragedy, Safer Communities has built partnerships and collaborative efforts between health and mental health professionals, law enforcement, school officials and county government to prevent violence in our communities and schools.  To date, there have been eight forums and initiatives to educate and collaborate on how to treat the root causes of violence.  Such initiatives focused on: looking at the connection between school absenteeism and youth crime and violence; being able to recognize mental illness warning signs in kids and what to do next; and developing proper communications and protocols when responding to a crisis in school. Astorino said thousands have participated and that the popular and successful initiative continues.

Other initiatives included efforts to increase after-school science programs, Telehealth Intervention programs for seniors and several expanded environmental programs.Astorino concluded by discussing what he called the “elephant in the room,” his decision to run for governor, which he said was based on the fact that he could make a positive difference for both Westchester and New York State.

“I am hoping to bring to Albany what has worked successfully in Westchester, and nothing will help Westchester more than a state government that is accountable and lives within its means,” Astorino said.