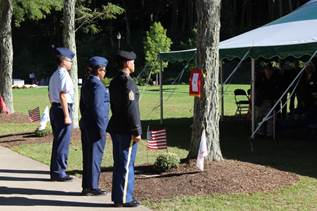 In a quiet ceremony on Sunday afternoon, County Executive Robert P. Astorino delivered gratitude and a virtual hug, on behalf of the county, to Westchester’s Gold Star Mothers –women whose children have been killed in the line of military duty. The program, opened by a procession of the Westchester County Emerald Society Pipes and Drums, took place along the Fallen Heroes Memorial Walkway at Kensico Dam Plaza.

Gold Star Mother’s Day was established in 1936 by President Franklin Delano Roosevelt, to be observed on the last Sunday in September. The day is set aside to acknowledge the uniquely painful burden borne by the mothers of fallen soldiers.

“Each of you delivered to us a brave, selfless individual who was so confident, so gallant, as to undertake the noblest of causes, that being to serve, protect and defend the way of life for 300 million strangers,” said Astorino. “Thank you for bearing the grief; for standing tall and inspiring us all. And most of all, thank you for giving us our heroes. Where would we be without them?”

As the names of the fallen were read aloud, the Gold Star Mothers in attendance stood silent sentry at the tree under which their child’s memorial plaque rests. Following a rifle salute, Taps was played by a distant bugler and the ceremony came to a close.