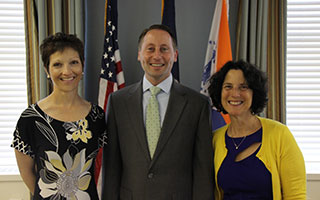 Robi Schlaff, currently executive director of Westchester Family Justice Center, to take on new role. County Executive Robert P. Astorino today announced the appointment of Robin “Robi” Schlaff, an attorney with vast experience in the areas of family law and domestic violence, as the new director of the county’s Office for Women (OFW). The appointment is effective July 8.

Schlaff, a resident of Chappaqua, is presently executive director of the Westchester Family Justice Center (WFJC), a position she will also continue to fill until October, the end of the current federal grant year. Diane Balistreri, who is senior manager of OFW, will continue in her current position.

“Robi Schlaff is an outstanding choice for this job,” said Astorino. “She is knowledgeable about the issues facing women and families and has shown herself to be a strong advocate on their behalf. Robi Schlaff and Diane Balistreri, with their separate records of accomplishment, will make a superb team.”

OFW is a division of the County Executive’s Office. For more than three decades, it has worked to ensure equal rights for all women. Among the many things it does is run programs to combat domestic violence,  provide job training for women and promote educational opportunities, including those for women veterans.

The budget for the office was increased this year by more than $50,000 —  for service providers with multi-year contracts in in the areas of domestic violence, civil legal help, education and training.

Under Balistreri’s leadership, the office was awarded a continuation grant from the federal government for the Family Justice Center and another grant to oversee a domestic violence homicide prevention initiative. As the chair of the county’s Domestic Violence Council, Balistreri helped the council focus on the most urgent matters relating to domestic violence and sexual assault. OFW organizes the Annual Police Conference to train law enforcement officials and advocates in domestic violence issues. It also  administers Judge Judy’s Her Honor Mentoring Program.

“ I thank County Executive Astorino for this opportunity to continue working on programs and policies that assist women and children in Westchester,” Schlaff said. “There is much that has been done and much more to do. I look forward to this challenge and working with Diane, the staff of the Office for Women and our many partners who run programs to help women.”

Balistreri said: “I am very excited to continue to work with Robi, something I have already been doing due to her position at the Family Justice Center.  Most of what we do in government is collaborative in nature, and this opportunity to join ideas and initiatives creates new energy and enthusiasm.”

Schlaff, who received her law degree from the Benjamin N. Cardozo School of Law, first joined the county government in 1998, where her duties included serving as liaison to the Office for Women. From 2007-2010, she was special counsel at the New York State Department of Environmental Conservation.

She worked in private practice from 2011-April 2012, before taking the position as executive director of the Westchester Family Justice Center. The bi-lingual center provides and coordinates referrals and services for victims of domestic violence and elder abuse. It works closely with victim advocates, law enforcement, lawyers, community-based organizations and county agencies (including OFW, social services, probation and the district attorney). Services are free.

In the past year the WFJC has doubled the number of people served and begun to further identify the most promising approaches to overcoming barriers to implementing permanent solutions to the problems associated with family violence. The center has also increased its outreach and training to law enforcement, service providers, judiciary, community-based organizations and the faith community.

The county has applied for a continuation of the grant that would extend the center for an additional three years.