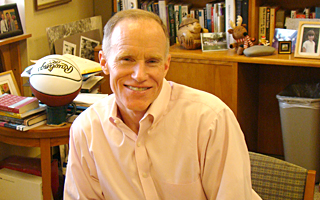 Robert Bonvento, the publisher of the River Journal, has asked me and Carol Conklin, the principal of Sleepy Hollow High School, to share some thoughts from our respective perspectives on our impressions of each of our senior classes—some reminiscing, some future challenges we see headed your way, some advice. We have also been asked to avoid any of the typical hoary clichés or boilerplate so often found in these types of addresses.

A challenge, for sure, but the guy thinks it’s one of the best ideas he’s ever had so I can’t disappoint him.

Or you. Your class has had a terrific run the past four years, and if this may be seen as a chance to say thanks and goodbye, I relish the opportunity.

So let’s begin with some memories. Here are a bunch that come to mind: Ben turning the paper into a high school version of the New York Times; a senior Halloween replete with costumes featuring Hillary, Janae and Sara as Transformers and Peter, Kevin, Jake and Chris as the Legends of the Hidden Temple and the Dows Lane teachers singing your praises as you read to their kids; the fundraising efforts for Haiti; the Billy Starr Scholarship and the Paul Steinberg Fund; superstar science researcher Laura; the real senior sleepout after the fake senior sleepout; Ms. Julian’s nonexistent Senior Breakfast (later rectified); the magical ride of the girls’ varsity basketball team as they won the state and federation titles and those of you who were with them at each step along the way; Sean’s game-winning touchdown catch with time expiring against Briarcliff; a sensational yearbook, thanks largely to Jessica; one of the finest Peer Leader groups since the program began 20 years ago; the best senior Color Wars theme in the history of the event (though I must admit a little bias here—Gemma’s brilliant idea to combine seniors with senior citizens struck a chord with the resident dinosaur in the principal’s office); the Color Wars win on your part; the multiple Homecomings; aeryOoOoo….; your dominating Powder Puff football team; green Pawprints on the road up the hill; finally, a prom at which students danced the entire evening; regular visits to the
administrative offices from Carolyn and Cinthia, perhaps best viewed as preemptive glad-handing in case they might be discovered doing something naughty; the finest golf team we’ve had in fifteen years; watching Kayla, Patrick, Catty, Tom, Zal, and Andrew perform on stage the past four years; Julian regularly leaving all other runners in his dust; National Merit All-Stars Josh B., Josh K., Anna, Zach, and Gordon and numbers 1 and 2 Becca and Dasha setting very high academic bars.

[inset side=right]”What lies behind us and what lies before us are tiny matters compare to what lies within us.” -Ralph Waldo Emerson[/inset]Obviously, the list could go on for awhile. The best part for me is being able to shake your hand on June 19 and to know something about each of you. Many, many thanks to you (and I’m including parents here) for making Irvington High School such an amazing community.

OK—time for the advice portion of this letter. It’s clear that you’re headed into one of the most challenging eras ever; the litany of what you’re facing reads like a piece of fiction.  Consider: Afghanistan, the oil spill, the economy, Iraq, bipartisan politics, Haiti, rising taxes, the jobless rate, etc., etc. But great challenges create great opportunities, and I am confident that if anyone can take advantage of whatever opportunities are going to be created, it’s you. And since you’re probably buried in advice at this point, I’ll keep it short and quote Ralph Waldo Emerson: “What lies behind us and what lies before us are tiny matters compared to what lies within us.” Thanks to your parents, your teachers, your friends and yourselves; you’ve got nothing but great stuff inside you.

About the Author: Scott Mosenthal