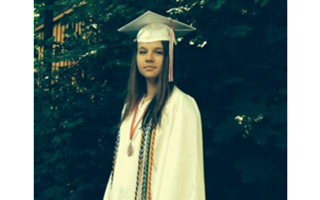 Katherine Thayer a graduated senior at Sleepy Hollow High School, has been recognized with a $3,500 GE STAR Award by the GE Foundation, the philanthropic foundation of the General Electric Company.

Katherine is the daughter of Carmella Thayer, who is employed by GE Capital Real Estate in Norwalk, CT.  As a part of the GE STAR Awards Program, the GE Foundation will also grant $500 to Sleepy Hollow High School. Katherine has the honor of selecting a teacher to designate how the $500 award will be used by the school.

The GE Foundation established the program in 1984 to provide competitive awards to children of eligible GE employees and retirees around the world.  Since then, more than 10,000 student and teacher awards have been given worldwide for a total of $14 million.  The winners are chosen based on their academic record, extracurricular activities and community service, and personal experiences and goals as described in a written statement.  The awards are used by the students to help meet their first year’s expenses at a 4-year college or university. Katherine plans to attend The University of California, San Diego.

The GE STAR Awards are administered by the Institute of International Education, an international non-profit educational exchange organization.

About the GE Foundation
The GE Foundation, the philanthropic organization of GE, is committed to building a world that works better. We empower people by helping them build the skills they need to succeed in a global economy. We equip communities with the technology and capacity to improve access to better health and education. We elevate ideas that are tackling the world’s toughest challenges to advance economic development and improve lives. The GE Foundation is powered by the generosity and talent of our employees, who have a strong commitment to their communities. We are at work making the world work better. Follow the GE Foundation at www.gefoundation.com and on Twitter at @GE_Foundation.  In 2013, the entire GE family—including businesses, employees, retirees and the GE Foundation—contributed more than $214 million to community and educational programs, $125 million of which came from the GE Foundation.