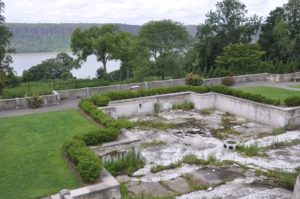 The Untermyer Gardens Conservancy has been awarded a grant of $50,000 from the New York State Office of Parks, Recreation and Historic Preservation, to be matched by the Conservancy, for design work to restore the Persian Pool in the Walled Garden. This is the first step toward the biggest project to be undertaken at Untermyer Park and Gardens, the restoration of its mosaic-lined pool.

The ziggurat-shaped pool lies at the base of the Temple of the Sky and is considered one of the most important features of the Walled Persian Garden. Originally a swimming pool for the Samuel Untermyer family, it will be converted into a shallow reflecting pool and relined with elaborate mosaics to match the original design. It is currently a ruin.

The Conservancy has been working with the Iranian-American community on this significant project through a major annual fund-raising event called Mehregan, which is the ancient Persian festival of thanksgiving for the harvest. The Empress of Iran visited the garden in 2017, and the inaugural Samuel Untermyer Award was presented to Christiane Amanpour at Mehregan in September 2018.

Mayor Mike Spano stated, “Untermyer Gardens is the crown jewel of our Yonkers Parks system.  This grant funded by New York State will continue the magnificent restoration of Untermyer, especially to the centerpiece of the garden, the Persian Pool.  Special thanks to the Untermyer Garden Conservancy and our state leaders for once again showing how a public-private partnership can work for the betterment of our community.”

Stephen F. Byrns, the founder and president of the Conservancy, said, “We are thrilled by this generous grant that will help us move closer to our most cherished dream of restoring the pool, which has been admired but also mourned by countless visitors over many years. Untermyer Gardens was called the most spectacular garden in America in the 1920s, and this will help us move along the path toward making it again one of the most beautiful landscapes in the country.”

A landscape architect will be hired to prepare the design drawings for the project in 2019-20. The Conservancy is determined to raise the substantial funds required to execute this restoration, which is targeted for 2022.