With the coming holiday season a short section of North State Road in Briarcliff is expected to reopen the day before Thanksgiving. The less than 500-foot stretch of road provides access into the Village of Briarcliff off of Route 9A and specifically to its inner Village business district.

The importance of reopening the road as soon as possible for merchants is coupled with many other factors that are just as significant to the health and well-being of  Village residents. First and foremost, North State Road developed a sink hole after a big storm cell passed over the Village on June 26 dumping 4.26 inches of rain in ninety minutes. Then Hurricane Irene flooded the Village Library and swimming pool right before Labor Day. They had also been flooded during the June 26 storm.

The volume of water from the two storms caused a massive build-up at a juncture where the six-foot wide culvert beneath North State Road drained into a four-foot wide feeder pipe. It undermined the road. The Village of Briarcliff began issuing reports on the condition of the western spur of North State Road, specifically its condition and prognosis. Nine reports were sent out to various Village entities and 7-8 of them mentioned the need to close North State Road for major drainage work and stabilization beneath it. Over 3,000 residents received notice on the scope of the work. 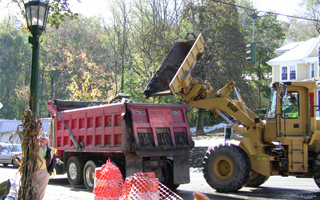 North State Road literally splits Briarcliff in half as it crosses over Route 9A. With it closed there is no easily travelled east- west corridor in the Village. Village officials have been cognizant that there is really “no good time” to close the road for repair and asked the State Department of Transportation (DOT) to expedite their request to repair the infrastructure  beneath the road’s surface.  On October 4 the DOT “signed off” on the project and was emphatic that the road be closed entirely (and would not allow one lane to be open) during reconstruction. The sheer magnitude of the work coupled with large moving construction equipment dictated total closure. A few politicians with little engineering expertise and less understanding of the scope of the work had claimed that North State Road could permit traffic during construction.

The project is expected to cost $865,000 unless complications are discovered as work progresses. The State and Federal government will reimburse contractors, the Morano Brothers, directly. That is definitely good news to Village taxpayers. Had this State and Federal money not been made available Briarcliff would have been severely impacted in its ability to finance or absorb other demands within the Village. Restrictions in restoration projects along with recreation programs and the rehabilitation of the swimming pool would have been suspended. 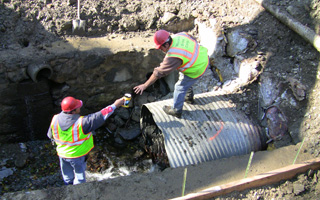 Much to the credit of Village officials the much needed work beneath the surface of North State Road has been done in a timely and expeditious manner. Repair work is being done to the highest level that will ensure the integrity of the road regardless of the storms to come. In addition, residents and merchants will have the road reopened prior to the holiday season.