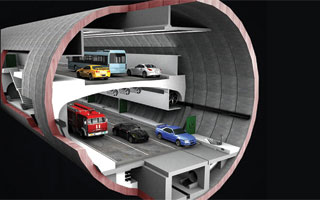 All the King’s horses and all the King’s men may be in lockstep with Governor Cuomo in his rush to build the Twin Bridges across the Hudson River, but it is highly improbable that these bridges will ever be built.

At right, the Orlovsky Tunnel currently under construction in St. Petersburg is a typical multi-lane 2-level large diameter tunnel.  This tunnel at 64-foot diameter is the largest to date, but the machine builders say that this is not the limit of their capability.

First amongst the many problems with the bridge proposals, is their unreasonable costs.  The present TZB, which has served the Thruway since it opened on December 15, 1955, was built for 80 million 1955 dollars.  This cost converts to 702 million 2014 dollars.  The Governor’s estimate of $5.2 billion is expected to actually come in at between $6 and $8 billion, or ten times the present dollar cost of the existing bridge.  This will result in a tripling or more of the tolls throughout the Thruway, and will be politically disastrous for Governor Cuomo.  People in Utica don’t wish to pay for the 10-times-too-expensive Tappan Zee Replacement Bridges. Secondly, such construction details as have been released to the public thus far describe pre-cast concrete bridges with over 1,000 pilings into the river bottom silt, most of which will not reach bedrock.  Seismic stability will be very questionable and there will be absolutely no possibility of the future addition of rail, either commuter or freight.

A charade of test pilings and test borings took place in the summer months of 2012, attempting to replicate the work previously done in 1952 and 1998.  No data from these so-called tests has been released to the public.

Thirdly, while full service rail, including freight, is absolutely necessary to avoid the 250-mile detour currently taken by two 100-car garbage trains every day in order to travel the 6 miles from Tarrytown to West Nyack, the inadequate structure of the bridges with no footing and high elevations will never permit rail service.  Commuter rail also will be missing.

The present TZB was designed by a brilliant engineer, Emil Praeger, and was quite suitable for construction in the geologic conditions of the river and for the anticipated vehicular load.  Praeger was responsible for the design of the floating caisons supporting the central span of the TZB.  When the costs came in too high for a tied arch bridge, the present cantilever redesign was promptly submitted by Praeger to get the costs under control.  Praeger came to the Tappan Zee project as the unsung hero of D-Day.  His floating harbors, which were secretly built in England and towed to the Normandy beaches, allowed the immediate transport of all the necessary support for the first wave of soldiers that hit the beaches.  Without Praeger’s harbors, the D-Day invasion might have failed, and tens of thousands or more troops could have died in vain, and the prompt victory of World War II might never have been achieved.

Brilliant technology enabled the construction of the bridge which has served for almost 60 years.  There is now a new brilliant technology available to us, which was not available in 1955.  Large diameter long underwater tunnels have become common art around the world.  The first major tunnel of this type was Trans Tokyo Bay in 1994.  Since then the available diameters have continued to grow, now exceeding 60 feet, which permits four lanes of traffic, emergency lanes, and 2 full-scale rails below.  Multiple other services including energy, data, and water transmission, are commonly included.

Advance rates of 100 feet or more per day are regularly achieved.  Standardized concrete lining segments as shown in the Orlovsky photo are automatically installed, and are comprised of the hard rock from the land side borings.  The 35,000 feet from Exit 12 to Exit 8 would be expected to be constructed in less than 1 year, at a cost between $1 and $2 billion.  Construction would start in the Tilcon Quarry at Exit 12 and would continue as necessary under the Thruway right-of-way.

A drawing for the Hudson River Tunnel was given to us at no charge in October, 2003 by Herrenknecht Ag, a leading tunnel machine builder based in Germany with operations all over the world.  These drawings, when ignored by our Tappan Zee study teams, were taken to China, and 4.6 mile twin tunnels crossing the Yangtze River were achieved in 22 months for $800 million.  This $800 million is a realistic tunnel price as seen on many jobs in Europe, and matches the present dollar cost of the TZB as constructed to Praeger’s design.

Had current tunnel boring technology been available in 1955, the complete North Ring as a critical part of the Interstate Highway System could have been built across Rockland and Westchester counties, and on across Long Island Sound to serve its rapidly growing population which now exceeds 7 million people. High speed and heavy rail would have been included.  Job flexibility in Rockland, Westchester, Nassau, and Suffolk counties would have been a natural result.  Tens of thousands of gallons, now millions over the past 50 years, of diesel fuel would have been saved.

A death rate due to air pollution in the Bronx is reported by the EPA to exceed 2,300 people per year.  Annual hospitalizations exceeding 20,000 also are reported.  Now that high speed large diameter tunnel boring is a perfected technology, and Governor Cuomo has precipitated a crisis on the Tappan Zee, we have an opportunity to start using modern tunnel technology to save millions of hours of driving time and many thousands of lives.

Governor Cuomo is pushing the Twin Bridges to Nowhere with no services as a jobs creator.  The legislation he forced in December 2011 to achieve Design Bid Build Construction dwells in detail on the jobs to be created by infrastructure construction.  Approximately 45,000 jobs over 10 years have been promised by the Governor’s sales team, and not surprisingly this is about 10 times the actual workforce of 4,000 jobs which built the TZB in 3 years, starting in December 1952 and completed in December 1955.  It is evident that the design of the Twin Bridges which is being so aggressively promoted at this time is not suited to the conditions of the Tappan Zee crossing.  Modern tunnel technology is exactly suited to these conditions, having been successfully employed worldwide.  There are hundreds of miles of large diameter tunnels for rail and automobiles through hard rock and soft silts in Japan, China, Australia, and dozens of other countries including the U.S. and Canada.

Environmental benefits of tunnels are comprehensive.  The surface of the river silts is not disturbed; no dredging is required; no land takings are required; air scrubbing is a natural; trucks will use the system with their engines off, burning no fuel; trains in tunnels will not contribute to pollution, noise, and danger along both East and West banks of the Hudson; all services, road and rail, can be extended across the entire 45 miles from Suffern, New York to Syosset, Long Island, with interconnecting ramps at all major rail and highway crossings.  Jobs will be immediately available; a workforce of some 5,000 can start right away to complete the river crossing in less than 2 years as there will be no environmental delays and tunnel design is standardized and proven.  Construction will proceed 24/7 in all weather.  These jobs may be continued for more than 10 additional years to complete the originally designed and now enhanced North Ring.

In view of the high pollution mortality rate resulting from the not-yet- available Long Island Sound crossing, acceleration of this program would be very desirable and could be achieved by using multiple worksites and a larger workforce.

Governor Cuomo, by trying to force the very expensive, essentially experimental, and almost unbuildable and very intrusive bridges, has in fact done us a great favor by forcing the discussion.  The anticipated result of the Governor’s ill-advised program will be the prompt construction of the Tappan Long Island Tunnels.  The tunnels will have the obvious advantages of air quality improvement, huge fuel savings, great real estate value improvement for all the riverfront towns and communities adjoining the present routes of I-87/287/95/495.  They will be built rapidly and efficiently saving billions of dollars both in construction and operation, and they will serve for many generations.  The many tunnels in the New York region, some built over 100 years ago under the Hudson, are all continuing to serve their intended function to this day and are requiring minimal maintenance.  So let’s forget the bridges and build the tunnels: the opportunity is here; the technology is here; and the need is now.