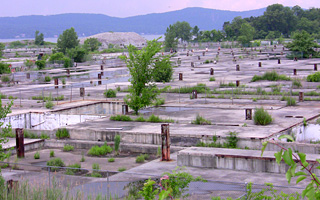 For a vacant and visually unappealing piece of waterfront, the General Motors site in Sleepy Hollow has been a focal point of attention since former Governor  George Pataki arrived in a canary yellow Hummer. He commended the Village and General Motors for their vision of creating a mixed use development to be known as Lighthouse Landing. Smiles, vigorous handshakes and glad tidings were plentiful as was the work before the Zegarelli administration. Much to the former mayor’s credit and the legion of volunteers who labored diligently at one point in time, Lighthouse Landing was actually seen in a positive light. It would substantially increase revenue to the public schools while maintaining thirty percent of the 94-acre parcel as public parkland in the form of a “green crescent.” Scenic Hudson was to be involved in enabling the Pocantico River to once again wend its way through the parcel and empty into the Hudson River. A river walkway would enable contact with the Hudson and the visual beauty of the palisades on its western shore. Amenities abounded in the original development plan in the form of a visitor’s center, boathouse and dock, soccer and tennis courts, a lighthouse center, DPW garage and fire station. All were to be built prior to any residential development. It was the calm before the storm.

From the outset the Village of Tarrytown was listed as an “involved agency” in the SEQRA (State Environmental Quality Review Act) process conducted by Sleepy Hollow. As such, Tarrytown could and did question the environmental findings of its sister village. In essence, two studies conducted by Tarrytown through a traffic consultant and a planning consultant were at odds with studies presented by Sleepy Hollow. In 2007 Tarrytown filed a lawsuit over the conflicting outcomes of their studies versus those of Sleepy Hollow. That lawsuit was put on hold until late May of this year when Tarrytown reopened litigation claiming that Sleepy Hollow’s recent SEQRA findings have done nothing to mitigate Tarrytown’s concerns. In short, Tarrytown has questioned the methodology used and claimed that Sleepy Hollow’s analysis is faulty.

On to specifics for those who remember the elderly woman in the hamburger commercial who would yell, “Where’s the beef?” The beef can be found in the number of housing units and the traffic control issues. Although numbers changed slightly, approximately 1177 housing units were originally discussed in 2007. This number was the lowest possible, according to GM and Sleepy Hollow, to make the project economically viable. “Not so,” said the planning consultant Tarrytown hired. Thus Tarrytown has requested that the project be reduced 40-50% in size in order to mitigate the impacts on its Village. In addition, Tarrytown has announced that “Sleepy Hollow not only failed in its obligations under SEQRA to adequately consider an alternative to the significant traffic impacts, it fell short of reducing the project sufficiently to eliminate those impacts or to require meaningful mitigation of those impacts.” According to an attorney retained by Tarrytown for this specific lawsuit, making Broadway  into a 4-lane road by eliminating parking on both sides has not been viewed as an alternative to traffic congestion in Tarrytown.

The Article 78, proceeding as it is known in the world of law and order, has been submitted by Tarrytown, and Sleepy Hollow has until the middle of July to respond to it. The proceeding is not a damage claim with a dollar amount attached. Rather, it’s an attempt to have a presiding judge rule in favor of Tarrytown claims and enjoin both Sleepy Hollow and General Motors from moving forward with its latest SEQRA findings… in effect, to put Lighthouse Landing into developmental limbo, a place between heaven and hell that is has occupied for quite some time.