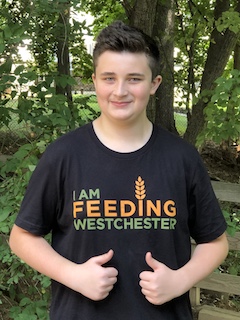 Hunger Doesn’t Take a Vacation. That was the inspiration for Julian Mueller of Tarrytown, a Stepinac High School sophomore and recent inductee into the school’s Honors Academy, when he organized an online fundraiser to help feed hungry children in Westchester this summer.

When the 14-year-old began the campaign in early July for the non-profit organization, Feeding Westchester, his goal of raising $1,000 by the end of August was quickly met as a result of a strong initial response from supporters. They included Webster Bank which began matching donations, a development that Julian posted on his fundraising page.

He then raised the new goal bar to $2,500 which was surpassed this past weekend. As of August 20, the total amount raised was more than $3,100 with the potential for even more donations during the remaining two weeks.

According to Feeding Westchester, each dollar donated equals four meals.  Thus far, Julian’s efforts have resulted in more than 12,400 meals… and counting.

Explaining why he undertook the project, Julian said: “I decided to focus my fundraising effort on school-aged children because I recently learned that nearly 58,000 (1 in 3) kids in Westchester County may be hungry this summer. During the summer, they do not have access to free or reduced-price school lunches. It’s really hard to believe that here in Westchester we have this problem!”

Supporters wishing to help Julian make a meaningful impact on those in need in the Westchester community can still make a donation by visiting his page: https://fundraise.feedingwestchester.org/fundraiser/1517176.