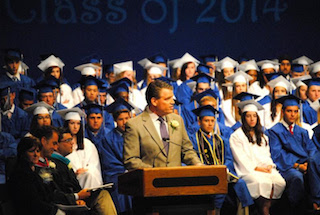 What do an MIT business professor, a college president, and the CEO of a social media giant have in common? They were all chosen as U.S. Presidential Scholars. Senator Terrence Murphy has been selected by New York State Education Commissioner Mary Ellen Elia to nominate two high school seniors – one male and one female – from the 40th Senate District for the prestigious U.S. Presidential Scholars Program. Looking to make informed and fair choices, Senator Murphy is calling on local high schools to participate in the process by recommending their best and bright students for consideration.

The Presidential Scholar recognition is one of the nation’s highest honors for high school students. Established in 1964 by President Lyndon Johnson, the U.S. Presidential Scholars Program honors the nation’s most accomplished high school seniors on the basis of outstanding scholarship. Each year, the State Education Department nominates ten male and ten female students statewide to be considered for recognition.

Schools interested in nominating students should send background information to Senator Murphy’s district office by Friday, October 27. Eligible high school students must graduate between January and June 2018 and be U.S. citizens or legal permanent residents. The criteria for consideration can include the qualities that make that particular student stand out among his or her peers, as well as what special challenges the student has overcome on their path to achieving academic excellence. Other factors to consider are the student’s character, leadership qualities, family responsibilities, involvement in school or community activities, and how their teachers have prepared them to succeed in college. Writing samples may also be submitted for consideration.  Letters to Senator Murphy must include the student’s name, gender, home mailing address, email address, and what high school they attend.

Senator Murphy has also been asked to recommend an additional student to be included as a candidate for recognition for excellence in career and technical education (CTE). Five New York CTE students will be nominated for national recognition. The parameters for a student to be considered can include technical competence, skills, ingenuity, creativity and real-world problem solving.

Senator Murphy said, “It is an honor to be part of the selection process. I know every high school in the district has a number students who are worthy of this recognition. I am looking to nominate students who have displayed extraordinary academic success, artistic excellence or have shown exceptional career skills. I am certain our nominees will proudly represent the 40th Senate District in this notable national program.”

Past Presidential Academic Scholars include 1979 awardee Elizabeth Kiss from Virginia, who became the eighth president of Agnes Scott College. Kristin Forbes from New Hampshire was recognized in 1988 and is now a business professor at MIT and a former member of the Council of Economic Advisors. Clara Shih from Illinois was selected as a CTE Presidential Scholar in 2002. A pioneer in the social media industry, Ms. Shih is now CEO and founder of Hearsay Systems.