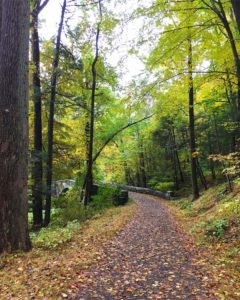 The culmination of a multi-year effort by The Friends of the Rockefeller State Park Preserve came today when the New York State Historic Review Board voted unanimously to designate the Preserve and its 65-mile carriage road network for inclusion on the State Register of Historic Places.

The designation recognizes the unique beauty and character of the 16-foot-wide, crushed-stone pathways designed by John D. Rockefeller Sr. and his son, John D. Jr., over a 40-plus year period from 1910 into the 1950s. The winding carriage roads are the signature feature giving the Preserve its distinctive and elegant look and feel and are integral to its overall appeal.

The network is one of only two such extensive systems in the nation. The other, in Acadia National Park in Maine and also Rockefeller-designed, already has historic designation. The State Park Preserve’s network includes well-engineered loops that traverse the property offering stunning vistas. Numerous stone bridges carry them across the Pocantico River and are noteworthy in their own right. Over 400,000 visitors from around the world walk the roads each year, joined by countless joggers and equestrians.

State Parks Commissioner Rose Harvey said, “The Rockefeller Pocantico Hills Historic District, which includes Rockefeller State Park Preserve and the magnificent network of carriage roads, is truly deserving of the nomination to the State and National Registers of Historic Places. The nomination honors the conservation ethic and philanthropy that made the Rockefeller family among America’s greatest benefactors of public park land.” 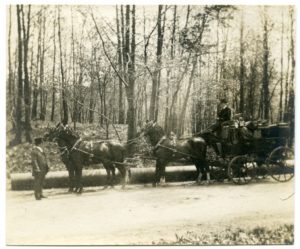 Ann Rockefeller Roberts, family member and author of Mr. Rockefeller’s Roads, stated: “My Grandfather John D Rockefeller Jr introduced me to these roads at an early age –he taught us to ride, and we each came to love these roads and the out of doors through him. I have walked and ridden on horseback and in carriages along these roads with my own children and grandchildren. My grandfather’s desire in creating these roads was that people from all walks of life would be able to receive Nature’s Blessings. In this high speed world, these carriage roads are a crucial resource – offering the calm and the beauty of nature to thousands of people. This generous and visionary action by New York State Historic Review Board will ensure that these beautiful and historic roads can be protected in perpetuity.”

George Gumina, Founder of the Friends of Rockefeller State Park Preserve, stated: “I deeply appreciate that New York State has recognized the historic value of the Preserve and the 100-year-old carriage roads by placing them on the Historic Register. They represent not only an important part of the history of Westchester County but also of the Rockefeller Family. The Friends group was inspired by the Family’s vision and we are pleased to see that vision fulfilled with this momentous action.”

The Preserve was one of 16 properties voted to the State Register. It is also in line for designation on the National Register of Historic Places.

The Friends of Rockefeller State Park Preserve received letters of support from several public officials including Congresswoman Nita Lowey and Westchester County Executive George Latimer along with organizations throughout Westchester County. This designation expands opportunities for federal and state tax credits and grants to support restoration, local tourism and economic development initiatives. The only other carriage road system that has this status is located at Acadia National Park in Maine.

About the Author: Josefa Paganuzzi