A grant-funded consultant hired by the Town of Ossining presented the results of a community survey to the Town Board on November 7th, a first step in the latest examination into further modernizing services within the Town.

The Town of Ossining, joined by the Village of Ossining, applied to the NY Department of State in August 2017 for grant funding to address possible efficiencies that could be realized to save taxpayer money in their operating budgets by streamlining services through a number of different strategies. Grant funding was received in early 2018, and the first phase of the project commenced with a community engagement process for Town of Ossining services only, marked by the creation of a website – projectforwardtoo.com – that outlined modernization facts and concepts.

The survey, completed by 177 residents, focused on community attitudes about the services and programs provided by the Town with the real emphasis on money-saving proposals to eliminate three Town positions currently elected by voters. 42% of respondents were from the Village of Ossining, 35% were from Town-Unincorporated, and 18% were from the Village of Briarcliff. More than half were over age 60 (57%), and another 31% between 49 and 60. Survey respondents were typically long-time residents, with 61% reporting that they’ve lived in the community for more than 20 years and 22% between 11 and 20 years. They also reported themselves as active voters, with 62% saying they always vote in Town elections and 23% indicating that they usually do.

The survey, devised by consultant Michael Conte and conducted in October, was promoted through a postcard mailed to all households, postings on the Town’s website and social media outlets, emails sent to residents who have signed up for Town notifications, meeting announcements, and through press releases.

“It’s really a great first step for us,” said Town Supervisor Dana Levenberg. “We want to make sure that our residents are fully informed and involved in the contemplation of change, and there is no better way to do it than to simply ask. In the end, the survey gave us some interesting insights into how the public sees the issue of modernization and whether we should keep moving forward.”

Mr. Conte noted in both his written report and a slide presentation (available on YouTube beginning at the 49 minute mark) that respondents were generally in favor of considering taking steps towards additional modernization and a pronounced level of initial support for the elimination of the elected positions. He advised the Board that a ‘next level’ of engagement should call for a public conversation with the Board subsequent to the dissemination of the survey results. Supervisor Levenberg tentatively identified that this meeting could take place in January.

“I want to thank our residents for standing up to let their voices be heard,” said the Supervisor. “And I want to emphasize that this is not the only chance to do so. We look forward to more conversations and communication with our residents as we continue to explore these concepts for change.” 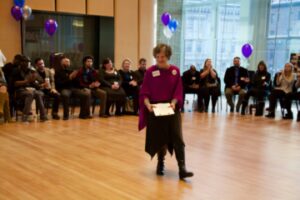