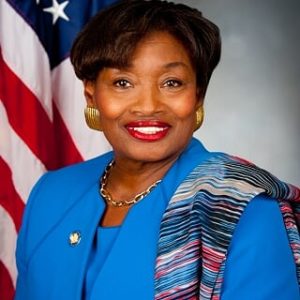 For the January issue, we asked Senator Andrea Stewart-Cousins, the in-coming Majority Leader of the Senate, to tell us about her accomplishments in 2018 and priorities for the coming year. The following was submitted by Senator Stewart-Cousins:

This year has been turbulent for our nation, but I have worked hard to protect New Yorkers from federal dysfunction and ensure our local communities thrive. Now, as the incoming Majority Leader in the New York State Senate, I will work to deliver further results for Westchester and communities across New York State.

The federal tax plan threatens to increase taxes for New Yorkers, especially in communities throughout Westchester. As leader of the state Senate Democrats, I worked hard to protect New York taxpayers, and we will keep fighting to minimize the harm caused by the federal tax plan. We must continue to work towards negating the damage from this harmful plan. As an example, the past year’s State Budget continues the $4.2 billion middle-class tax cut and maintains the local property tax relief credit to save property owners an average of $380.

I have always said that education is the great equalizer, and I believe the State has a responsibility to make sure every student can access high-quality education. That is why I worked tirelessly to fight for increased funding for our local public schools. I have advocated for Community Schools for many years to help students in our more high-needs communities succeed. The most recent state budget increased the state’s investment in Community Schools by $50 million. The budget also included a nearly $1 billion increase in overall education aid, bringing total school funding to $26.7 billion. I am very proud to have fought for my community in particular, so that the local schools in my district received nearly $25 million more than in the past, bringing total local school aid to over $433 million.

I have also worked with local teachers to expand access to computer coding classes to underserved students within my district. I initiated a program to teach coding to these children and launched the pilot at the Theodore Young Center. Through this growing initiative, students can participate in classes that equip them with the skills they need to pursue further education in computer science and succeed in the future. I assembled a group of high school volunteers to teach these students. The program is ongoing, and I look forward to expanding it to new spaces and recruiting new volunteers.

For the third year in a row, I hosted the “Angel Project,” a program that pairs generous “Angels” with grandparents and other kinship caregivers raising children whose parents are unable to care for them. Many charities give presents to these caregivers’ children, but few give gifts to the grandparents, who sacrifice so much for the children in their care. “Angels” give presents to these grandparents, and this year, nearly 80 caregivers received gifts at a holiday luncheon I hosted in December. I collaborated with the Family Service Society of Yonkers, Family Ties, and the Greyston Community Garden Program for this event, which was sponsored by the ShopRite of Greenway Plaza in Yonkers, La Pinata Bakery, and the Yonkers Community Action Program and hosted at Sarah Lawrence’s Center of the Urban River at Beczak (CURB).

As the incoming Senate Majority Leader, I am excited to be leading a Conference that truly represents the diversity of New York State. I am proud to become the first woman in state history to ascend to this position, so that finally a woman’s perspective will be at the table during budget negotiations. I am also proud that my Senate Democratic Conference will include 14 women Senators, one of whom was a refugee and several of whom are new or first-generation Americans. These experiences will help our new Senate Majority fight for ALL New Yorkers and ensure our state is a more welcoming place to live, work, and raise a family.

I look forward to leading the State Senate and New York State forward as we take the Majority in 2019. We have the opportunity to take action on major issues that have been blocked for too long. These priorities include protecting women’s rights and health care options, fixing our broken voting system, passing the Child Victims Act, reforming our criminal justice system, supporting affordable housing, defending our seniors, protecting our environment, and guaranteeing affordable health care coverage for every New Yorker. We will ensure that state government is responsive and reflective of New York values like protecting the rights of workers, vulnerable communities, and immigrants.

From working for the City of Yonkers, to serving as a Westchester County Legislator and State Senator, and now as the incoming State Senate Majority Leader, I have been committed to helping and improving our community. I will continue to prioritize constituent services, relieving our taxpayer burden and delivering needed resources for our local schools and communities. Each day I am proud to serve my district, Westchester, and New Yorkers and am excited about all that we can achieve in the coming year.