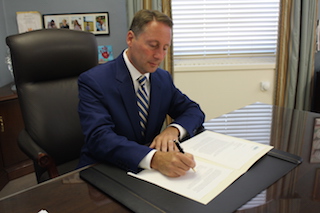 Westchester County Executive Robert P. Astorino today vetoed a sanctuary county law passed last week by the Board of Legislators, saying in his veto message that the Act “endangers public safety, violates federal law, infringes upon long-established principles of law enforcement cooperation and jeopardizes millions in federal public safety grants.” The Immigration Protection Act was approved 10-5 by the Board of Legislators last week and the county executive is within the 10-day deadline to veto the Act.

The county executive and his administration had been working with legislators and immigration groups to try and craft a bill that didn’t run afoul of federal law, local law enforcement objections and the interest of public safety.

There was near unanimous opposition to the Act from local law enforcement leaders.  Westchester County Department of Public Safety Commissioner George Longworth said: “Anything that inhibits our ability to work with federal law enforcement partners like the FBI, the Department of Homeland Security and other agencies is a bad and reckless idea.”

Sgt. Hector Lopez, president of the Westchester Hispanic Law Enforcement Association, said passage of the law endangers law-abiding residents while providing a safe haven for undocumented immigrants who have broken the law. It places “handcuffs on our law enforcement officers, not the criminals” and opens the doors for undocumented immigrants involved in criminal activity, such as the ruthless MS-13 gang, to migrate to Westchester and prey on other immigrants, Lopez said.

In his legal opinion, County Attorney Robert Meehan said the law would qualify Westchester as a “Sanctuary County” as defined by the United States Department of Justice and jeopardize nearly $13 million in federal public safety grants and reimbursements.

The Legal Aid Society of Westchester found sections 7 and 9 of the Act “problematic” and is concerned that restricting Homeland Security from the county jail would cause them to “move to other areas to find non-citizens such as courts, houses of worship, schools, etc.”

Astorino stressed that while immigration reform is needed, it is ultimately the duty of Congress, not local legislatures. “For more than two decades, Republicans and Democrats have failed to fix our nation’s immigration system,” Astorino said. “That failure is why we are here today.”

Astorino said that he is working on an Executive Order that will assuage the anxiety of many in the undocumented immigrant community that they cannot report crimes or seek medical assistance for fear that they will be deported.

“Washington needs to get its act together.  In the meantime, Westchester will continue to protect all of its residents,” said Astorino.  “However, if you end up in our jail for committing a crime, and you’re not here legally, we’re not providing a sanctuary for you.”

For the period January 1, 2017 to June 30, 2017, there were 84 undocumented inmates in the county jail with detainer requests, 30 of whom were transferred to ICE. Some, convicted or charged with serious crimes such as manslaughter and rape, were sent to state prison. And some, who were charged or convicted with crimes such as grand larceny, assault, burglary, menacing, criminal possession of a controlled substance and driving while intoxicated, were not taken into custody by ICE and thus released back into the community following completion of their sentence.  Homeland Security prioritizes who they request detainers for and ultimately who they take into custody based on information that perhaps they alone are privy to.